Bursting with fresh, sweet apples and tart, ruby cranberries, my Game of Thrones-inspired Apple Cranberry Crisp is not only a feast for the eyes but also a guaranteed crowd pleaser! 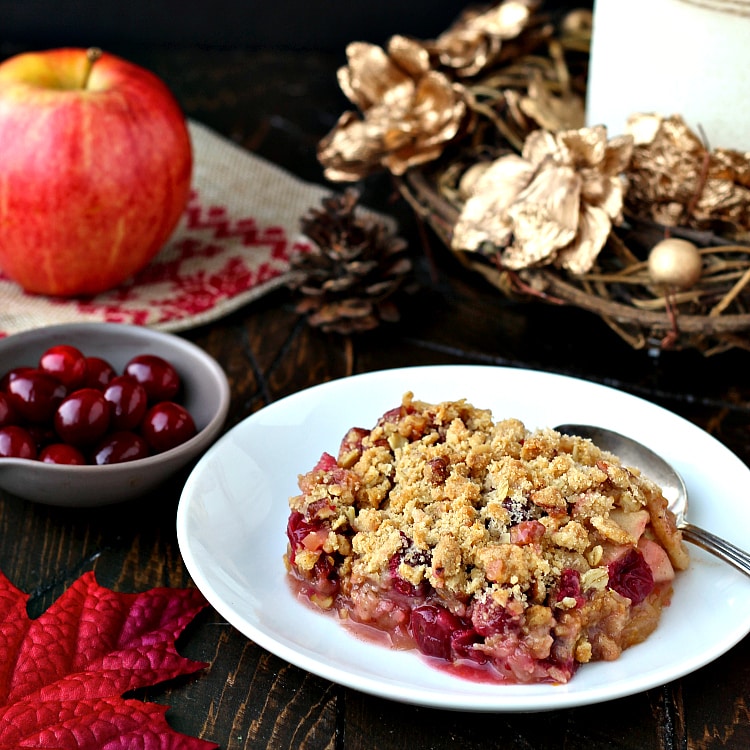 Can you believe that it’s less than 2 weeks away from the New Year’s Eve? I honestly don’t know where the time goes! To celebrate the end of 2016, this month’s Recipe Redux theme is a fun little game called Grab a Book & Cook. We were challenged to grab our nearest cookbook and make a healthier version of the recipe on page 201, 16 or 216- or any combination of the number ”2016.” 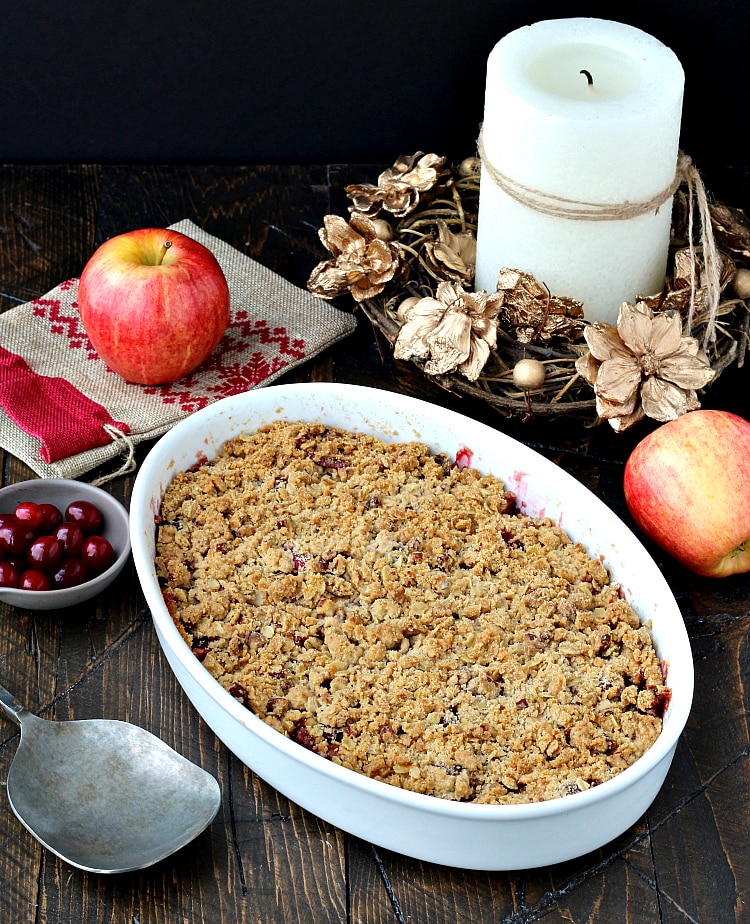 So I grabbed my newest cookbook off the shelf and got to work! The truth is that I have quite an eclectic collection of cookbooks. You may be surprised when I tell you which book I chose… A Feast of Ice & Fire: The Official Game of Thrones Companion Cookbook. That’s right, the secret’s out- I’m a huge Game of Thrones fan! Our good friends Jarone and Roxy actually gifted this book to me after they visited earlier this year. Best gift ever! 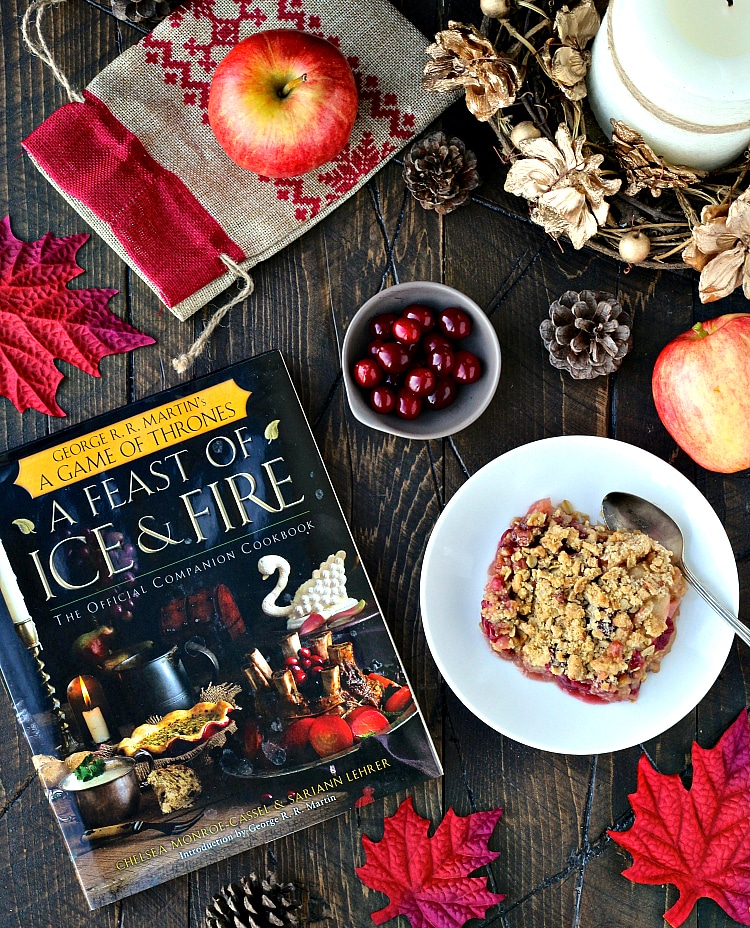 In case you’ve never heard of Game of Thrones (seriously, is that even possible?!), it’s a hit television show on HBO that’s based on a series of fantasy novels by George R.R. Martin. Written by two superfans of the show, the cookbook has more than 100 recipes covering a wide range of cuisines from across the Seven Kingdoms and beyond. “From the sumptuous delicacies enjoyed in the halls of power at King’s Landing, to the warm and smoky comfort foods of the frozen North, to the rich, exotic fare of the mysterious lands east of Westeros, there’s a flavor for every palate, and a treat for every chef.” 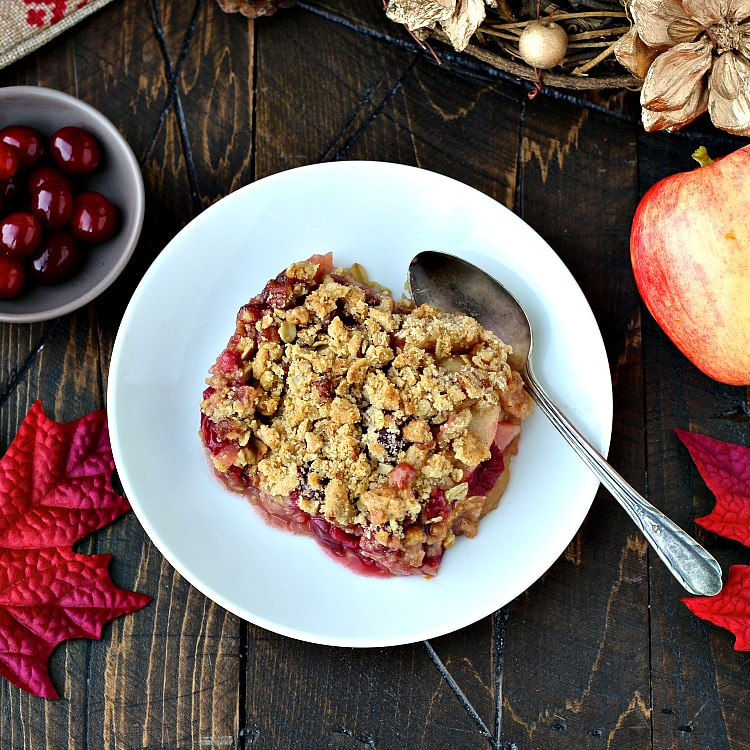 The recipes have been refined for modern cooking and the authors have suggested substitutions for some of the more fantastical ingredients that you may not have in your cupboard like live doves or dragon eggs! To my delight, the recipe on page 16 was a relatively simple dish- Medieval Applecakes, which is referenced in the Game of Thrones book in relation to one of my favorite characters, Jon Snow. The original recipe yields a donut-like treat stuffed with a warm, nutty apple filling. I decided to simplify things by keeping the apples but skipping the homemade dough- after all, during the holidays, simple is best! 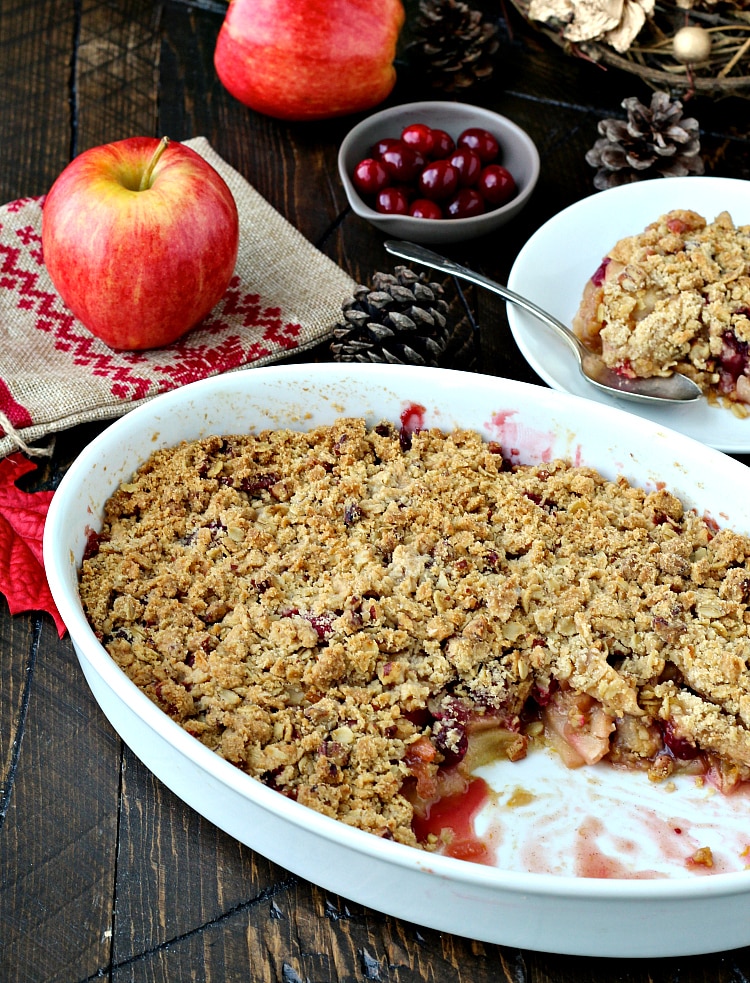 My Apple Cranberry Crisp is the perfect dessert for your holiday or New Year’s Eve party. Bursting with fresh, sweet apples and tart cranberries, it’s not only lovely to look at, it can also feed a crowd! I love making fruit crisps because they are so much easier to make than pies and tarts and everyone devours them! You simply spread the fruit filling in a baking dish, top it with a simple, crumbly topping and bake it in the oven until bubbly and golden brown.

Why my apple cranberry crisp is healthier than traditional recipes 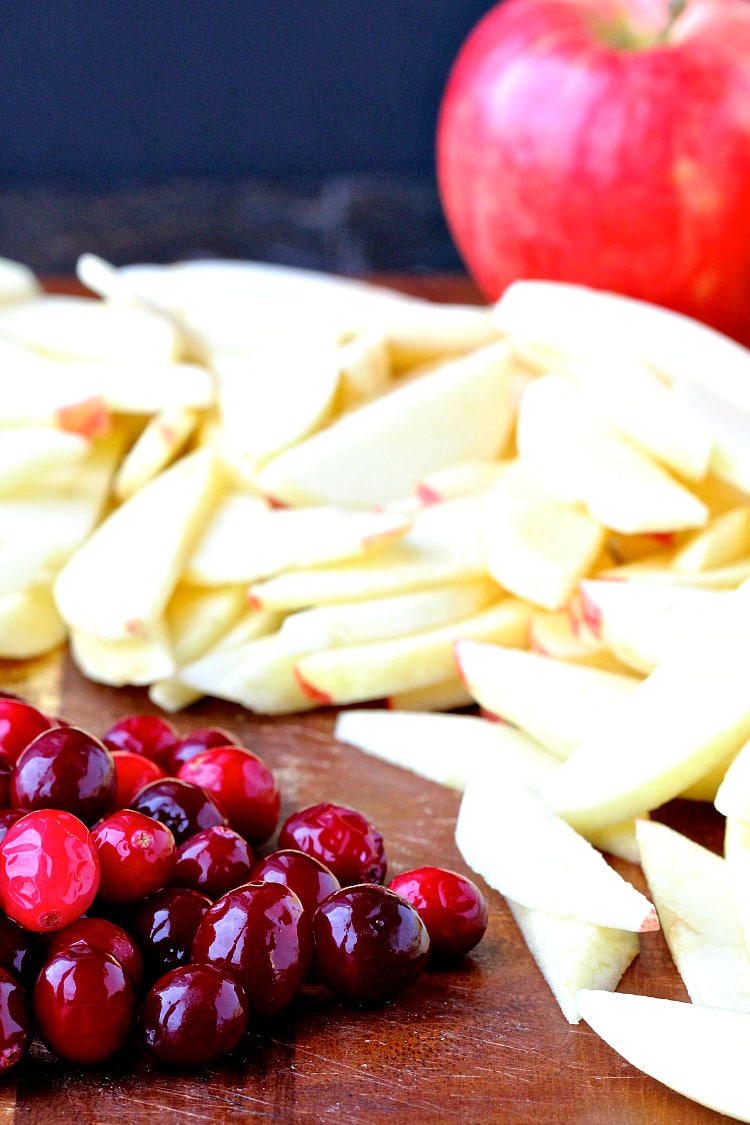 When you take the crisp out of the oven, let it cool for at least 10 minutes before serving. The filling will thicken as it cools. It’s delicious alone or topped with ice cream or whipped cream. The leftovers are also perfect the next morning topped with a dollop of Greek yogurt. 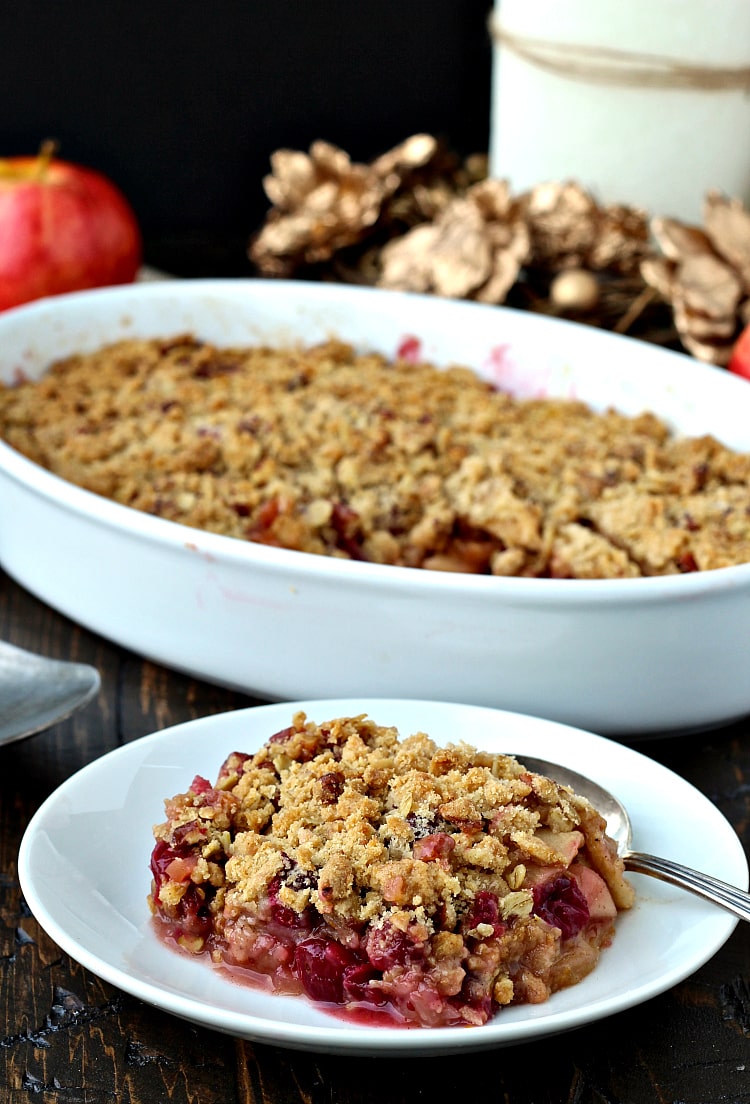 Wishing you all a wonderful holiday season and Happy New Year!
What are your favorite dishes to feed a crowd?
Do you have any special New Year’s Eve plans?
Leave a comment below and let me know! 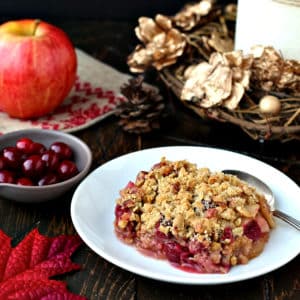 did you make this recipe?  Snap a pic and mention @thefoodiephysician on instagram- i’ll be sure to share!

looking for more dessert recipes?  You may like these: 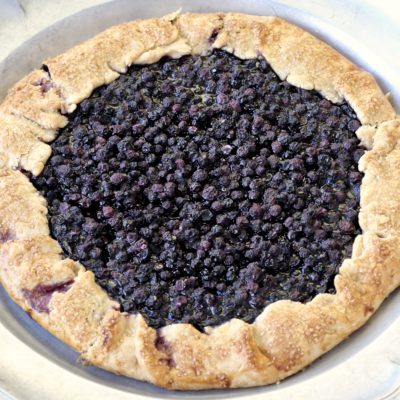 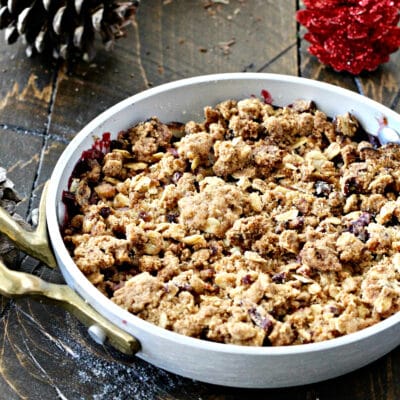 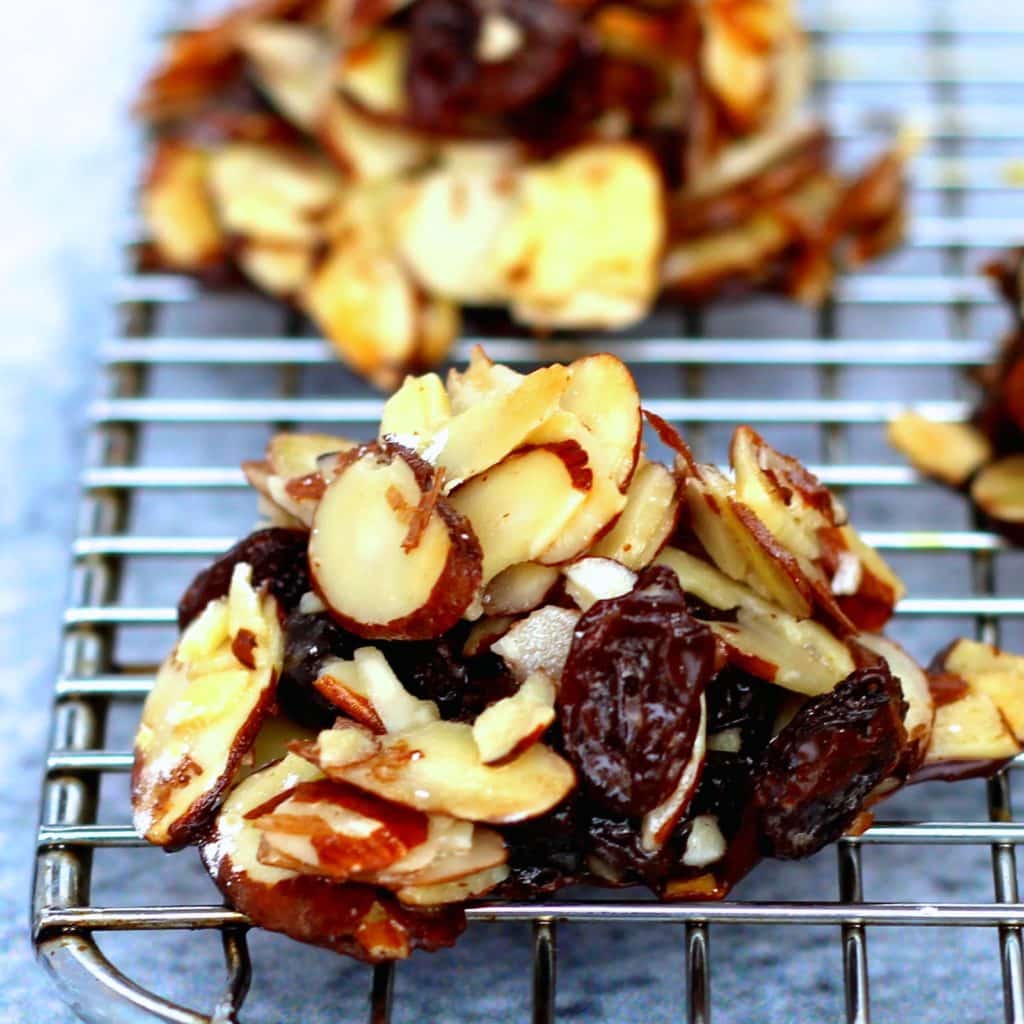