These tasty Cinnamon Apple Chips are a delicious and nutritious snack that both kids and adults will love! Made with just two ingredients, these healthy homemade chips will fill your kitchen with a heavenly aroma as they bake in the oven.

Now that fall is here, it’s officially apple season.  We’ve all heard the old adage, “An apple a day keeps the doctor away.”  While I’m not sure that’s entirely true, it’s definitely a step in the right direction!

Apples are a delicious, healthy and filling snack.

Many of the nutrients are in the skin or just under it, so be sure to leave the skin on.

If you’re looking for a new way to incorporate more apples into your diet, try my Cinnamon Apple Chips.  They’re nutritious and they can satisfy a serious sweet tooth.

To achieve the best, crispiest chips, slice the apples as thinly as possible.  The best way to do this is with a mandoline, a kitchen tool used for uniformly slicing food.

I think a mandoline is a good investment and there are several inexpensive varieties you can buy online.  If you don’t have one, you can thinly slice the apples with a knife.  If desired, you can core the apples before slicing them but I chose not to because the uncored apples have a really pretty appearance.

Once your apples are sliced, lay them out on lined baking sheets in a single layer.  Don’t overlap them or they will steam and get soft instead of crispy.  Use multiple baking sheets if you need to.

Sprinkle some cinnamon on your apple slices and pop them in the oven.  Many apple chip recipes call for a sprinkling of sugar but I found that they didn’t need the extra sugar.

Besides coming back to flip them over halfway through, you can pretty much forget about them for the next 2-2 ½ hours.  And while they cook, they will fill your house with the most heavenly aroma.

When they’re done baking, I turn the oven off and let them cool in the oven for an additional hour.  As they cool, they will continue to dry out and crisp up some more.

I experimented with four different varieties of apples and found that the Gala and Granny Smith apples achieved the best, crispiest results.

The Honeycrisp and Fuji apples turned out a bit chewier.  Golden Delicious and Red Delicious apples will also work well. 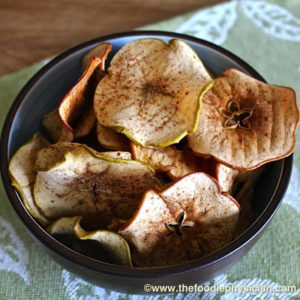