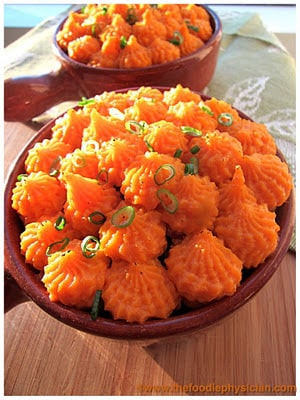 Shepherd’s pie is a centuries-old dish that originated in the UK.  Classic shepherd’s pie consists of a filling of ground lamb, sometimes with a few vegetables included, that’s topped with a pillowy crust of mashed potatoes.  When beef is used in the filling instead of lamb, it’s referred to as “cottage pie.”  The dish likely originated in the North of England and Scotland where there are large numbers of sheep (hence the name) and was probably created as an inexpensive way to use up leftover meat.  It’s the ultimate, stick-to-your-ribs comfort food- the kind of dish you want to tuck into on a cold winter’s day.
But like many traditional comfort foods, this dish is loaded with calories and fat.  So I set out to make a lighter version that would be more nutritious without sacrificing flavor.  To put my own spin on it, I decided to infuse this classic dish with Southwest ingredients like chipotle peppers, cumin, oregano and cilantro.  And instead of white potatoes, I make my topping with sweet potatoes whose natural sweetness nicely complements the spices in the filling.
Here are the reasons why my dish is healthier than traditional Shepherd’s pie:
o       By substituting lean turkey for lamb or beef you’re cutting calories and saturated fat.  Ground turkey comes in many different varieties so make sure to choose a lean or extra lean variety.  To make up for the leaner cut of meat, I add a lot of spices to up the flavor factor without adding calories.
o      Traditional shepherds pie has a lot of meat mixed with a few vegetables like onions, carrots and sometimes peas.  My version uses more than a pound of mixed vegetables.  To save time, take a little help from the grocery store and use frozen vegetables or a mixture of fresh and frozen like I do in this recipe.  Frozen vegetables sometimes get a bad rap but they are flash frozen at their peak ripeness, a time when they’re the most nutrient-packed.  So they are a good choice in the winter months when fresh produce is not at its peak.

o      Sweet potatoes have about the same amount of carbohydrates as white potatoes but they are full of vitamins, nutrients and antioxidants.  And they’re low in calories (a medium sweet potato has about 100 calories), low in sodium and virtually fat and cholesterol-free.  Their rich orange color means they’re high in beta-carotene, which gets converted to Vitamin A in the body. One medium sweet potato provides more than 400% of the recommended daily intake for Vitamin A! Vitamin A is important for vision, immune health, growth and reproduction. Sweet potatoes are also high in Vitamin C, Vitamin B6, manganese and potassium.  And if all of this isn’t enough, they also are a good source of fiber, which is important for digestive health and keeps you feeling full longer.

o     The mashed potato topping is usually made with lots of cream and butter, which add a significant amount of calories and saturated fat.  Sweet potatoes are naturally creamy and sweet so you don’t need to do too much to them.  I just add a little chicken stock for flavor and reduced fat sour cream to make the topping nice and fluffy. 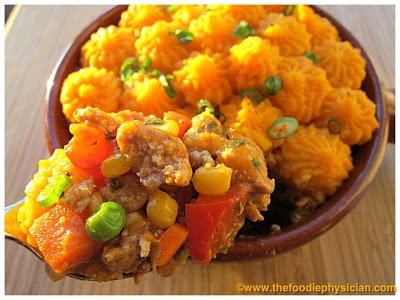 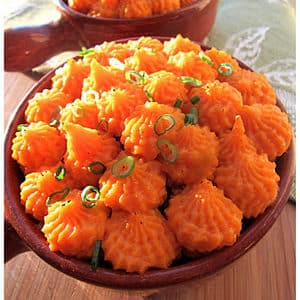 Calories: 408kcal | Carbohydrates: 57.2g | Protein: 22.1g | Fat: 9.9g | Saturated Fat: 2.8g | Fiber: 8.97g
Did You Make This Recipe?Tag @thefoodiephysician and hashtag #thefoodiephysician on Instagram. If you liked this recipe, please click on the stars and rate it! 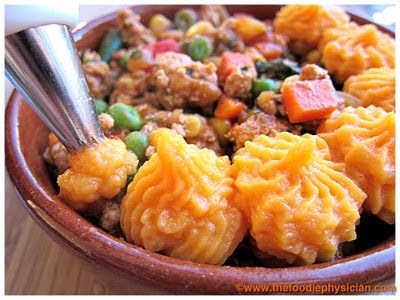 Chef Gordon Ramsey has said that shepherd’s pie is his ultimate comfort food.  What’s your favorite comfort food?  Leave a comment below and let me know!