A delicious and hearty vegan dish, my Slow Cooker Jackfruit Tacos will satisfy even the biggest meat eaters. 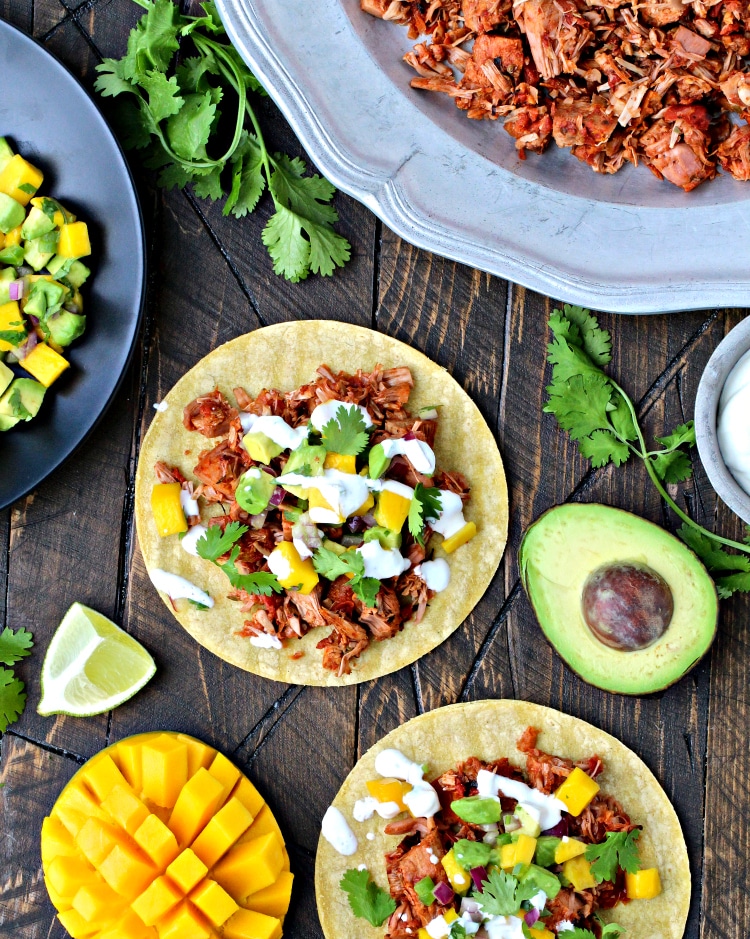 I’ve been experimenting a lot with vegetarian and vegan recipes recently as I’m always looking for new and interesting ways to incorporate more plant-based foods into my diet. So when I saw that this month’s Recipe Redux theme was “Beat the Heat with the Slow Cooker/Instant Pot/Pressure Cooker” I knew what dish I was going to make!  My Slow Cooker Jackfruit Tacos are the perfect dish to beat the heat this summer.  There’s no need to turn on the stove- simply toss everything into the slow cooker and a couple of hours later, dinner is ready to go! 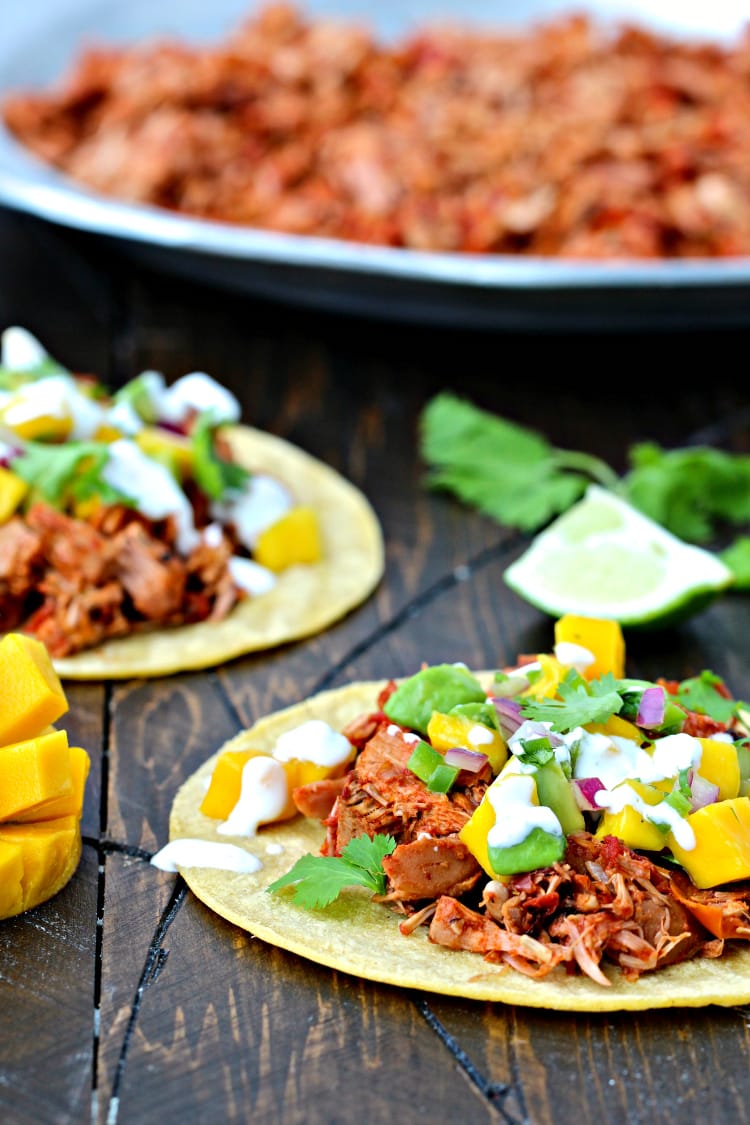 I’ve been wanting to test out with this recipe for a while now, ever since my brother-in-law and sister-in-law took us on a vegan culinary tour of LA a couple of years back.  I got to try some amazing vegan dishes, including jackfruit tacos.  I was amazed by the texture of the jackfruit, which looks just like pulled pork when you shred it with a fork.  Jackfruit is a tropical fruit native to South Asia.  While the mature fruit has a sweet flavor, the young, unripe fruit is savory with a slightly tangy flavor and meaty mouthfeel.  If I had to compare it to something, I would say that the flavor reminds me of artichokes.  It’s extremely versatile and takes on the flavors of the spices and ingredients that it’s cooked with.  It can be used in a wide variety of dishes such as Indian curries, tacos and pulled “pork” sandwiches. 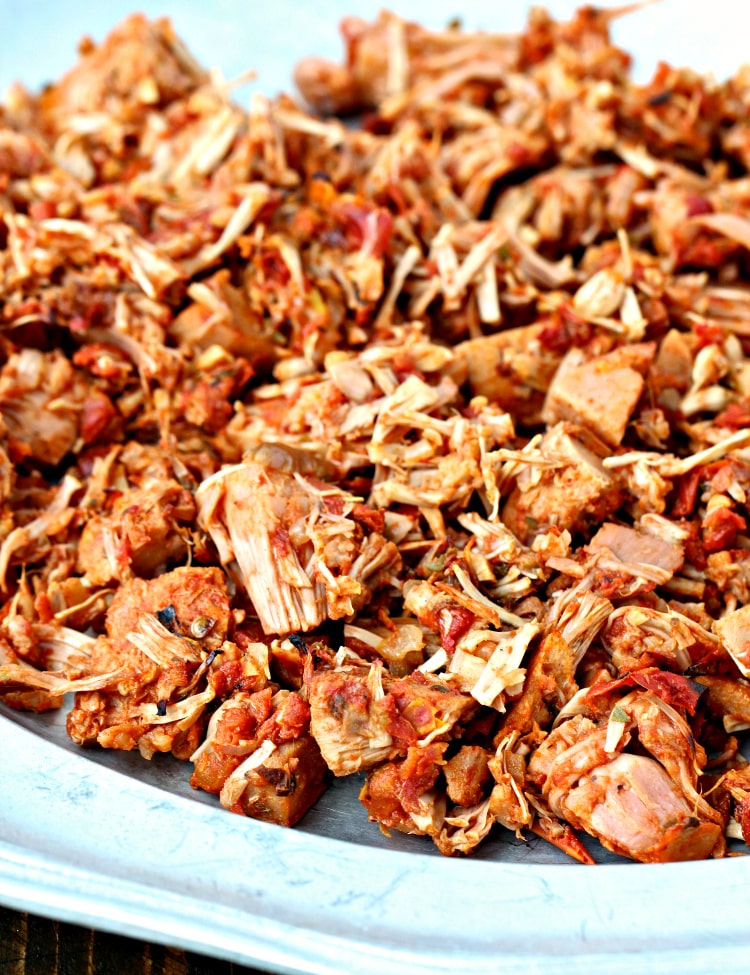 Although it’s been used as a meat alternative in Asia for centuries, jackfruit’s popularity has only recently spiked in the US, taking it from exotic to mainstream.  A lot of this has to do with the fact that the demand for plant-based meat alternatives has grown significantly in recent years.  According to the Nutrition Business Journal, 25% of U.S. consumers decreased their meat intake from 2014 to 2015 and meat alternative sales nearly doubled from $69 million in 2011 to $109 million in 2015. 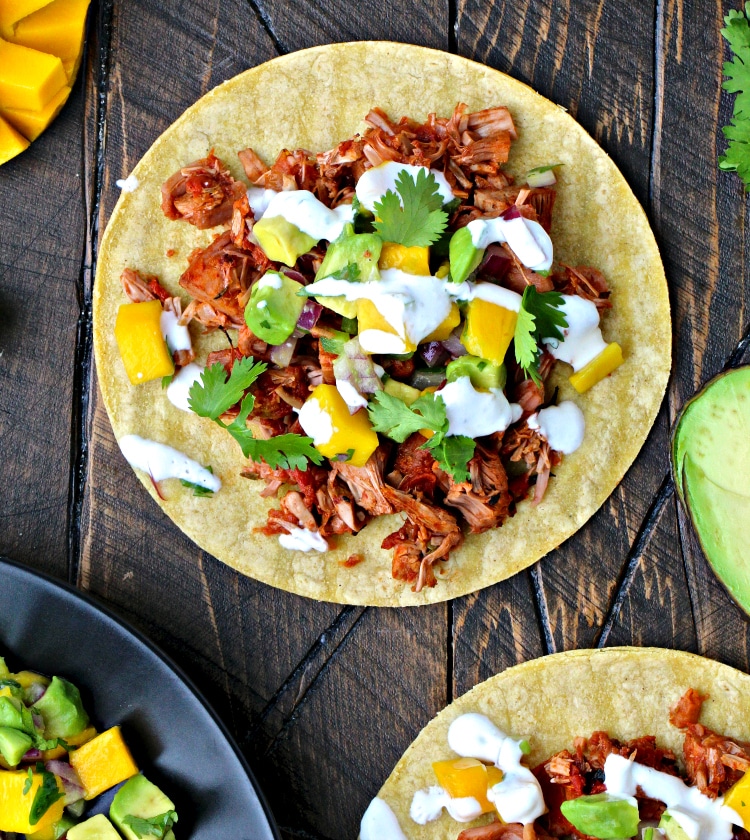 You can find canned jackfruit at Asian markets or specialty grocery stores (I found it at Whole Foods).  Make sure you buy young jackfruit in water, not in syrup.  Jackfruit is low in calories and high in fiber, B-complex vitamins, vitamin C, and minerals like potassium, magnesium, manganese and iron. 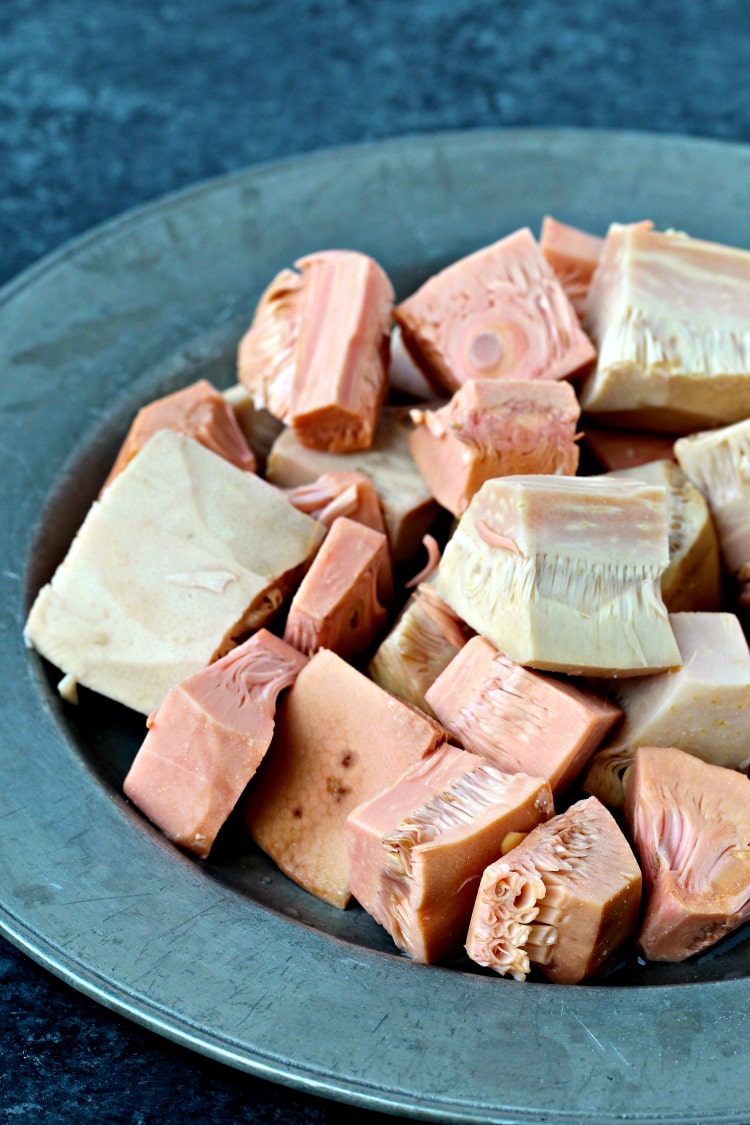 For my Slow Cooker Jackfruit Tacos, I decided to cook the jackfruit in a slow cooker along with smoky chipotles in adobo, cumin, oregano, and fire roasted tomatoes to infuse them with plenty of rich flavor.  At the end, I shredded it up with a fork, leaving some big chunks for texture.  It’s amazing how similar it looks to pulled pork! 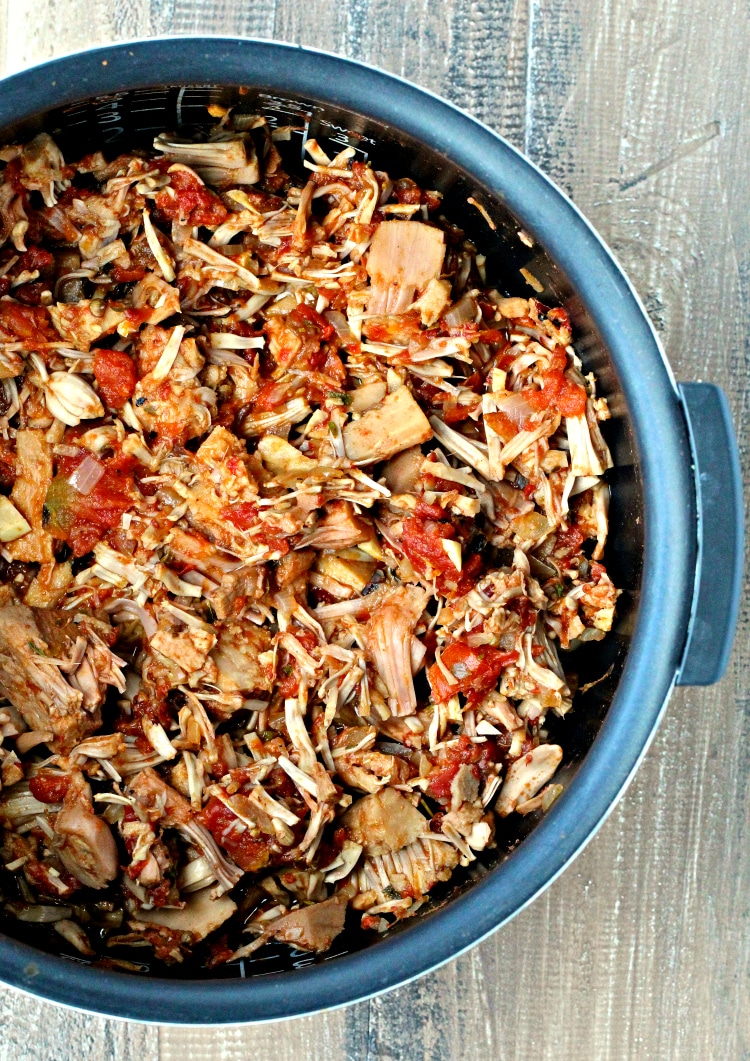 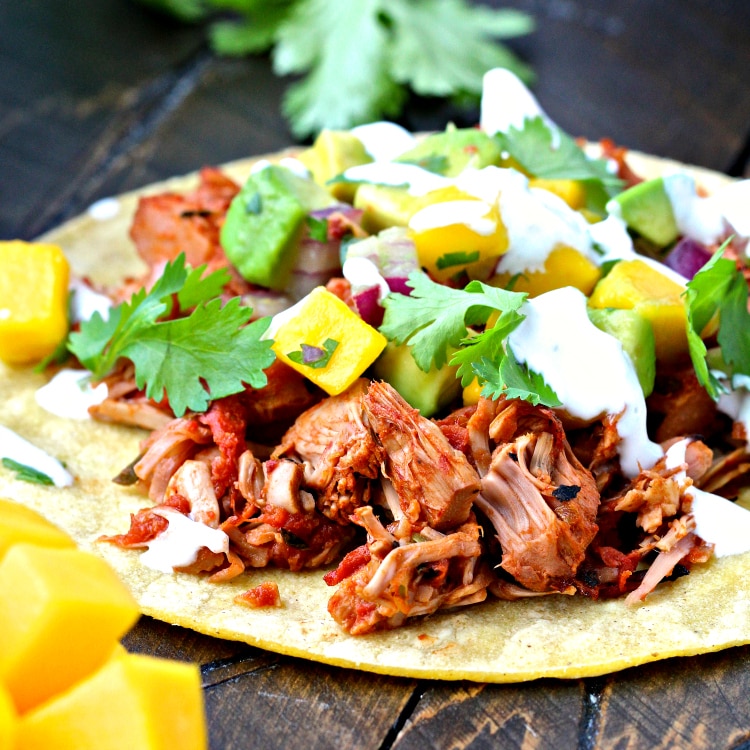 Because the jackfruit has a mildly tangy flavor, I thought it would be best to pair it with a sweet salsa.  So I made my Mango Avocado Salsa that I recently posted.  It’s a really versatile salsa that can be paired with pretty much anything including grilled chicken or seafood.  I found that the sweetness of the mango and the richness of the avocado complemented the jackfruit perfectly. 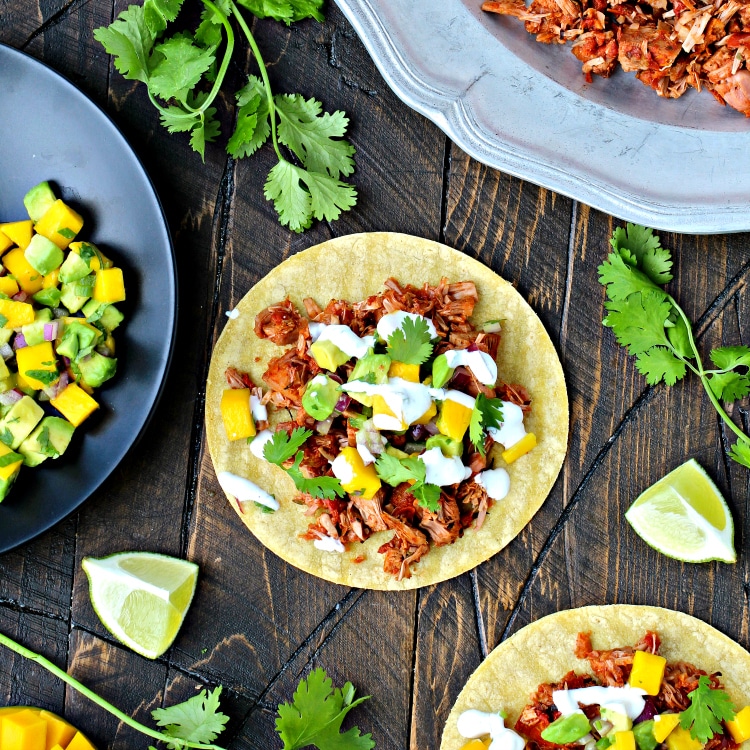 I served the shredded jackfruit on soft corn tortillas and then topped them with the salsa. For a finishing touch, I drizzled a little Greek yogurt (you can use nondairy yogurt or sour cream if you’re keeping the recipe vegan) on top and sprinkled on some cilantro leaves. 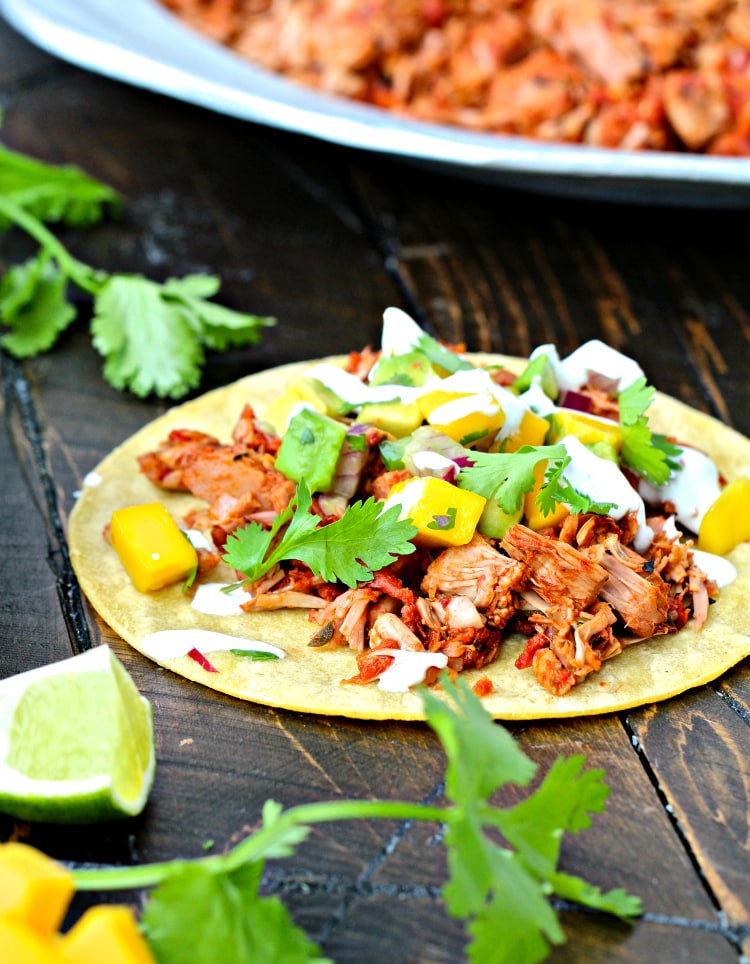 A delicious and nutritious vegan dish that will satisfy even the biggest meat eaters.  And I didn’t even have to turn on the stove.  It doesn’t get much better than that! 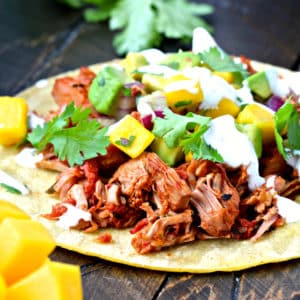