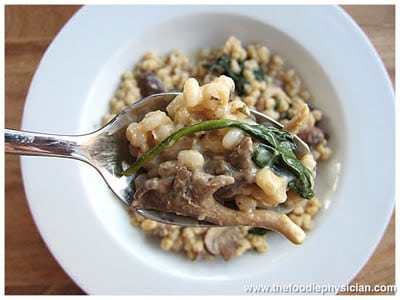 I don’t often get to grow my own vegetables living in an apartment in the middle of New York City.  Sometimes I long for an outdoor garden where I can grow fresh herbs and vegetables a la Barefoot Contessa.   So when I heard about the Back to the Roots Grow-Your-Own Mushroom Garden Kit, I leapt at the chance to cultivate my own crop and ordered one online.  Founded by two former UC Berkley students, this kit turns “waste into wages & fresh local food” by growing gourmet mushrooms entirely from recycled coffee grounds.

I have to say that after watering it twice a day for almost two weeks without any signs of life, I had almost completely given up.  And then one morning I woke up and saw adorable little mushrooms sprouting from the cardboard box.  I actually let out a yelp of delight that made my husband come running into the room to see if I was alright!  Over the next few days, they grew even more until I had a full crop of beautiful oyster mushrooms.

I wanted to make a dish that would do justice to these lovely mushrooms.  I immediately thought of making a risotto, one of my favorite Italian dishes, but I wanted to make a more nutritious version using a whole grain.  Risotto is a rice dish that is usually served as a primo, or first course, before the main course.  Classic risotto is prepared with a specific type of white rice.  My version, however, is made with barley (a whole grain) and cooked in the style of risotto, which means that liquid is added to the grain in increments and stirred often.  This cooking technique allows the starches in the grain to release slowly and gives the dish a creamy texture.  Barley comes in a few different varieties including hulled, pot/Scotch and pearl barley.  My recipe uses pearl barley- a type of barley that is hulled (the inedible outer layer is removed) and polished.

Classic risotto is made with short- or medium-grain rice with a high starch content because these varieties give the creamiest texture.  The main types used in Italian cooking are Arborio, Carnaroli, and Vialone Nano (with the latter two considered to be the superior varieties).  Because barley risotto is not naturally going to be as creamy as traditional risotto, I like to add a little something at the end to up the creaminess factor.   Traditional risottos are finished with grated cheese and butter or sometimes mascarpone cheese.  My version uses grated Pecorino Romano cheese and a small amount of reduced fat cream cheese, which not only adds creaminess but a nice flavor as well.

Barley has a chewier texture than traditional risotto rice which may throw people off the first time they try it. However, I like the toothsome bite and find it to be hearty and comforting, especially in the winter months.  It also has a nice nutty flavor that works well with the earthiness of the mushrooms and thyme in this dish.  I also stir in some baby spinach at the end for an extra boost of nutrients and color.   This dish takes a little time and patience to make because barley takes longer to cook than traditional risotto rice.  If you don’t have the time to stand over the stove stirring the whole time, you can add the liquid in larger increments.

And finally, if you’re a purist and prefer to make a traditional Italian risotto with Arborio, Carnaroli or Vialone Nano rice, you can use the same technique that’s described in this recipe, just be sure to adjust for a shorter cooking time.  Buon appetito!