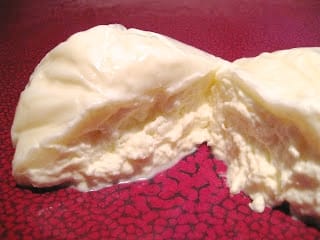 There's an ingredient that's making a splash in the culinary world and has been showing up more and more often on the menus of many upscale restaurants- burrata cheese. Burrata (pronounced boor-RAH-tah) is a specialty cheese that for years was very difficult to find because it was only imported from Italy, but recently some American producers have started making it, thus it has become more available to home cooks.

Burrata is actually a ball of mozzarella but what makes it different is that is filled with a mixture of fresh cream and pieces of mozzarella. When you cut into the ball of cheese, the deliciously creamy center oozes out. Burrata is a specialty of the Apulia region of Italy, an area located within the heel of Italy’s boot. It was first made in the 1920s and was a way for producers to use up the ritagli (“scraps” or “rags”) of mozzarella left over in the cheesemaking process. Traditionally it is made with mozzarella di bufala, mozzarella made from buffalo's milk, but today it is also made from cow’s milk. 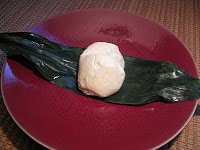 It is made in the same way that mozzarella is made except for the last step in which the burrata is filled.  An enzyme called rennet is added to warm milk, causing it to separate into solids (curds) and liquid (whey). The curds are then plunged into very hot water and kneaded and stretched until they form a pliable mass. They are then shaped into balls and pinched off. With burrata, the hot cheese is formed into a pouch and filled with the ritagli and topped off with cream. We actually made mozzarella in culinary school- it was quite a fun experience pulling and stretching the cheese.

The cheese is packaged and shipped the same day it is made. It is commonly wrapped in an asophodel leaf, which is similar to a leek. The leaf is used as a sign of freshness- if the leaf is green, it indicates that the cheese is fresh.  Although it has a shelf life of about two weeks, it is a very delicate cheese and should ideally be consumed within 48 hours. It can be found in specialty food stores or online from sites such as igourmet.com. 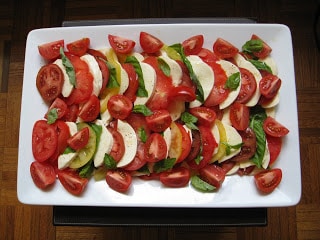 The cheese has a rich, buttery flavor (burro means butter in Italian) with a creamy interior when you break into it. It’s delicious served plain drizzled with a little extra virgin olive oil and cracked black pepper with crusty bread on the side to scoop up the creamy curds. Or use it to make a unique caprese salad by layering it with heirloom tomatoes, and basil. You can also toss chunks of it with spaghetti cooked with a little olive oil and garlic. I was experimenting with burger recipes the other night so I decided to make a burger using the burrata.  I ended up creating a burger that's an Italian variation of a BLT sandwich.  I topped the burger patties with a delicious slice of creamy burrata, a couple of pieces of crispy pancetta, a few grape tomatoes that I charred on my grill pan, and a tangy artichoke aioli, all on a piece of garlic focaccia- buono appetito! 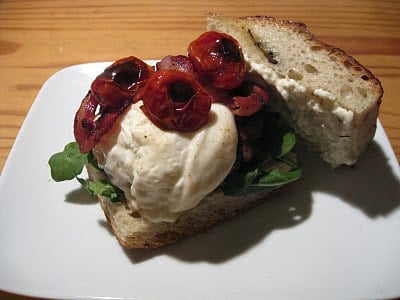 Note: If you can’t find burrata, try substituting a ball of fresh buffalo or cow’s milk mozzarella. And for the vegetarians, this burger makes a great sandwich- just leave out the patties and pancetta!