My Shrimp and Grits are a lightened up version of a classic Southern dish. 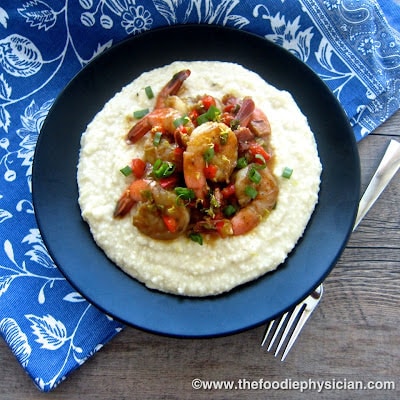 I’m often inspired by the food that I eat on my travels.  On our recent road trip from New York City down to our new home in Florida, my husband and I travelled through the South and we splurged on many classic Southern dishes.  We filled our bellies with fried green tomatoes, biscuits and gravy, crispy fried chicken, collard greens, black eyed peas, and of course plenty of ice cold, sweet tea.

But the dish I found myself craving the most when I got home was shrimp and grits.  So I decided to
perform a recipe resuscitation and set about trying to create a healthier version of this hearty Southern classic. Growing up in the Northeast, I had never really experienced grits, which are such a staple in the South.  Grits are made from coarsely ground corn.  They’re available in white or yellow varieties and are usually cooked in water or milk until they reach a porridge-like consistency similar to Italian polenta.  Grits are often served for breakfast topped with some butter and cheese or they’re served with shrimp in the classic dish originating in the South Carolina Lowcountry.  Good news for those of you who are short on time- they also come in a quick cooking variety. 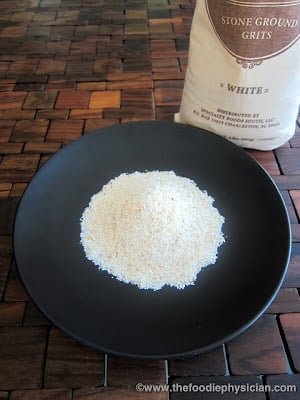 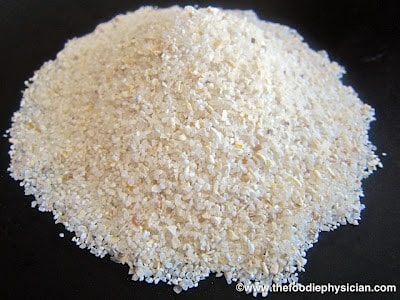 Because this was my first time cooking grits, I experimented and cooked them a few different ways.  Traditional grits often have a substantial amount of butter and cream added to them for extra flavor and creaminess.  I found that by cooking the grits in a combination of chicken stock and milk, it infused them with a lot of flavor and gave them a creamy texture without having to use any butter or cream.  I used Skim Plus, which is a very creamy skim milk, but if you don’t have it, you can use traditional skim or 1% milk.  To finish the grits, I opted for Parmigiano-Reggiano cheese instead of cheddar since it’s so packed with flavor, a little goes a long way.
To cook the shrimp, I swapped out the traditional butter or bacon grease for heart healthy olive oil. For extra flavor, I tossed the shrimp with a Cajun seasoning blend.  If you don’t have Cajun seasoning, you can season the shrimp with a mixture of dried spices like thyme, paprika, garlic powder, cayenne and oregano.  I then cooked the shrimp in a light sauce made with chicken stock thickened with a small amount of flour.  By making the sauce this way, you don’t have to use the butter that’s traditionally used to finish the sauce.  If you’re feeling especially inspired, instead of using ready made chicken stock, you can make a quick shrimp stock with the shrimp shells to infuse the dish with a richer shrimp flavor. 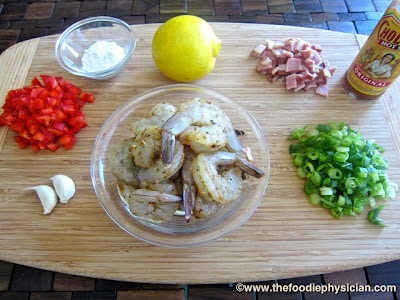 Instead of using traditional bacon or smoked sausage, I used Canadian bacon in the dish.  Despite its name, Canadian bacon is not a true cut of bacon, which is taken from the side region of the pig. Canadian bacon is a smoked cut of pork taken from the loin region (a leaner region) and thus has significantly less calories and fat.  It still has a great smoked flavor that goes so well with the other ingredients in this dish.
And finally, to pump up the nutrition factor in the dish, I added some chopped red bell pepper. Besides adding vibrant color, peppers also add a nice boost of Vitamin C.  They also contain high levels of Vitamins A, E, K and B-complex vitamins as well as the antioxidant lycopene.
So if you want to bring a bit of Lowcountry flavor into your home, go ahead and try this lightened up take on a Southern classic. 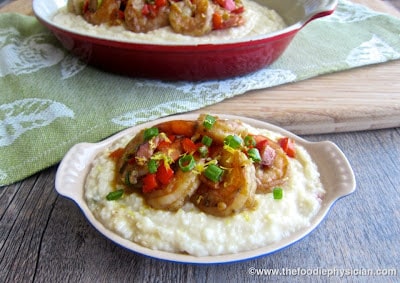 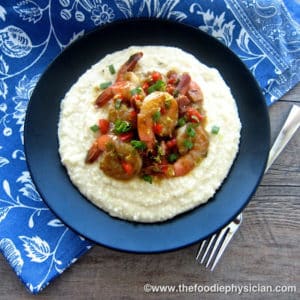 * If you don’t have a premixed Cajun seasoning blend, you can sprinkle the shrimp with a combination of dried thyme, paprika, garlic powder, oregano, and cayenne. 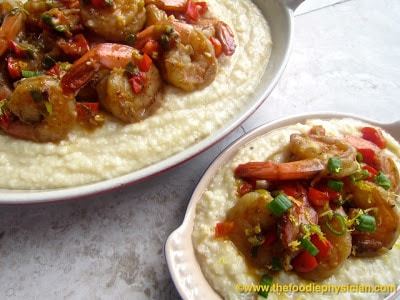