I recently had the opportunity to participate in the New York City Umami Food and Art Festival http://www.umamifestival2010.com/, an event meant to "foster collaborations between artists and food professionals."  The Cooking & Art competition pairs culinary students with high school art students and professional artists, and I was chosen to participate with a few of my classmates from ICE.  Our mission- to explore the secret ingredient and transform it from ordinary to extraordinary.

A few days before the festival, we learned what the secret ingredient would be (drumroll please)...spaghetti!  We found out that we would have to prepare two dishes- an appetizer and entree incorporating spaghetti, and then on the day of the competition we would receive a second mystery ingredient which we would then have to use in a dessert.  Unfortunately we also received a few other surprises during the week- my classmates and I were split up into two separate teams, our professional artist cancelled, and because of a huge snowstorm, we would not have the opportunity to meet at all before the day of the competition.  Things were not going well and I wasn't sure we would be able to pull it all off in the end.

On the day of the competition, my classmate and I made an early morning run to Whole Foods to pick up our ingredients, then we met our high school student Zack about an hour before the competition started to go over our gameplan.  Fortunately, Zack had brought his friend Will so we had an additional set of hands.  We then learned what our second mystery ingredient would be- Jolly Rancher candies.  We knew we had a big challenge ahead of us!

The next couple of hours went by in a blur.  Our first dish: a crispy Asian spaghetti cake with a pan seared scallop, red curry sauce, cilantro oil, and fresh pineapple salsa. 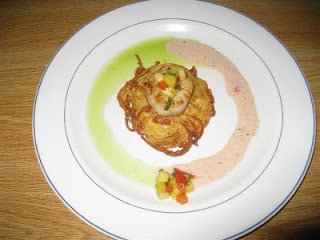 We mixed cooked spaghetti with eggs, milk, ginger, garlic, scallions, and a little soy sauce, then fried it in a saute pan for a couple of minutes on each side.  It's actually a delicious way to use leftover spaghetti and has a nice crunchy exterior with a soft center.  For the spicy red curry sauce, we used Thai red curry paste as a base to which we added coconut milk, fish sauce, brown sugar, and lime juice.  The cilantro oil was made by quickly blanching fresh cilantro leaves and stems in boiling water, then pureeing it in a high speed blender with canola oil and straining it.  And for the pineapple salsa we mixed diced pineapple, red bell pepper, jalapeno pepper, cilantro, lime juice, and canola oil. 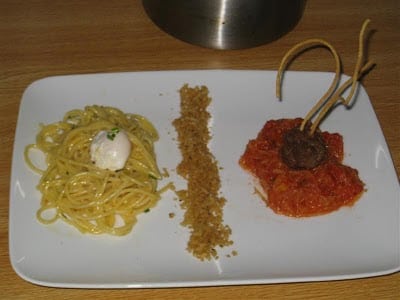 For the spaghetti carbonara we wanted to make homemade pasta but unfortunately our dough did not come out as we had hoped so we used the dry pasta that was provided to us.  We incorporated bacon, eggs, and chives in the sauce and poached quail eggs on top which oozed delicious, runny yolk when the judges broke into them.  For the spaghetti squash marinara, we roasted spaghetti squash instead of using actual pasta.  When you run a fork through the flesh of the cooked squash, it looks like strands of spaghetti.  For the  sauce we used onions, garlic, tomato paste, San Marzano crushed tomatoes, red pepper flakes, and basil.  And for the mini meatballs we mixed ground lamb with onions, garlic, and parmesan cheese.

To make the spaghetti sticks, we fried cooked strands of spaghetti in hot oil.  Each stick ended up having a unique shape which added a lot of visual appeal when we pushed them into the meatballs.  They're actually quite easy to make and really fun if you're ever looking for a cute, crunchy garnish.  And finally, the spaghetti breadcrumbs were made by finely chopping up cooked spaghetti and sauteeing the pieces in a pan with butter, dried breadcrumbs and herbs.

For our final dish, we had to incorporate Jolly Rancher candies, not exactly an easy ingredient to use.  We decided to go all out and try to make a baked dessert, knowing that it was a risk.  We made our version of a red velvet cupcake.  The cupcake is topped with fresh whipped cream that has crushed Jolly Ranchers mixed in.  We were very happy with the colorful, tasty end product. 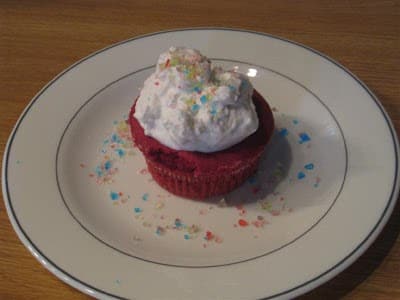 The judging panel consisted of Chef Sam Mason (formerly of WD50), Iron Chef Judge Akiko Katayama, and Martha Wilson, Director of Franklin Furnace.  Overall they really liked our presentation and balance of flavors as well as our creative use of the mystery ingredients.   After a long, exhausting day in the kitchen, we were pleasantly surprised to find out that our team had won the competition!  It was a close competition and many of the other dishes (especially those made by my other ICE classmates) looked absolutely delicious.  Our prize was a bag of goodies including cookbooks and chocolates.  Overall it was a good experience and one thing is for sure- I'll never look at spaghetti the same way again! 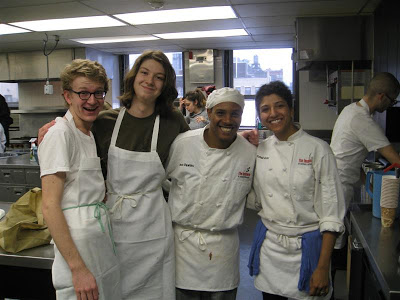