Baingan Bharta is a delicious vegetarian eggplant dish that's a staple on Indian restaurant menus. I make mine by roasting the eggplant in the oven, which gives it a rich, smoky flavor.

I’ve been getting a lot of requests for Indian recipes like my Chickpea and Spinach Curry, so I thought I'd give it another go. Here's my version of another classic Indian dish, Baingan Bartha.

Baingan bharta is an eggplant dish that’s a staple on most Indian restaurant menus. It's a North Indian Punjabi dish made with mashed eggplant.

The eggplant is typically cooked over a direct flame. Then once it's softened, the chopped, mashed eggplant is sautéed with a savory mixture of onion, tomatoes, and spices.

Baingan bharta in the oven

If you’ve ever been intimidated by Indian recipes or have yet to try one, you may want to start with this Oven Roasted Baingan Bharta. It's a relatively simple Indian dish that you'll love!

Traditional recipes for baingan bharta call for grilling the eggplant over a direct flame to get the skin charred all around. However, that involves constantly turning the eggplant to ensure even cooking.

I much prefer to roast the eggplant in the oven. Not only is it easier, it also gives the eggplant the same rich, smoky flavor that you get from grilling.

Simply prick the eggplants all over with a fork. Then roast them in the oven until the skin is wrinkled and the flesh is soft, about 40-50 minutes. While it's roasting, you can prep and chop your other vegetables and spices.

When the eggplant is done, remove it from the oven and let it cool. Then, peel off the skin and chop up the eggplant flesh.

There are a handful of herbs and spices in this dish including cilantro, ginger, garlic, cumin, turmeric and garam masala.

Garam masala is a blend of dried spices that is commonly used in Indian cooking. There are probably as many different varieties of garam masala as there are Indian cooks! Most of them contain a mixture of spices that include peppercorns, cloves, cumin, coriander, and cardamom.

All of these spices can be found in specialty grocery stores and Indian markets.  They are also starting to pop up more frequently in traditional grocery stores in the spice aisle.

The good news is that once you have all of these spices, you can make just about any Indian dish.  Spices are a great way to add a lot of flavor to a dish without adding calories.

I like to grate my ginger and garlic with a Microplane zester/grater because I don’t like big chunks of those aromatics in the dish. If you don’t have one, you can puree them in a mini food processor with a little water, or just chop them as finely as you can. You can also buy prepared ginger garlic paste at Indian markets.

While the eggplant is roasting in the oven, heat some oil in a skillet on the stove. Cook the onion, spices, and tomatoes together until softened.

Add the oven roasted eggplant along with some peas and let it all cook together until the flavors meld. While peas are not a traditional part of this dish, I like to add them for a pop of color and texture.

Garnish the dish with fresh, chopped cilantro and you're done!

How to serve this dish

Serve this Oven Roasted Baingan Bharta with Indian naan or roti. You can also serve it with steamed rice. I also like to serve homemade raita on the side but you can substitute plain Greek yogurt. The tanginess of the yogurt nicely balances the smoky flavor of the eggplant.

Did you try this recipe? If so, please leave a review below. I love hearing from you! ⭐⭐⭐⭐⭐ 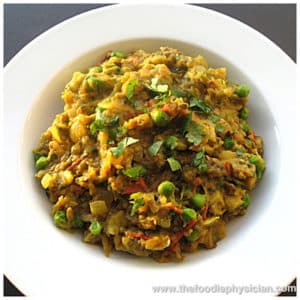 * Garam masala is a blend of dried spices commonly used in Indian cooking. Most varieties contain a mixture of spices that includes peppercorns, cloves, cumin, coriander, and cardamom.