These festive naan crostini are packed with holiday flavors and are perfect for entertaining.

This blog post was sponsored by Stonefire® Authentic Flatbreads but all opinions expressed are my own.

Holiday season has always been one of my favorite times of the year. Spending time with family, opening presents, eating lots of good food… what’s not to love? But let’s face it- the holidays can be a bit hectic at times too. Amidst the hustle bustle of holiday shopping, holiday parties, wrapping gifts, school functions, and everything else, getting dinner on the table can sometimes be a challenge. And what about when those unexpected guests pop by for a holiday visit?

Instead of reaching for a bag of chips, this season, I ask you to invite Stonefire into your kitchen and say #HelloNaan. Stonefire makes authentic naan, artisan flatbread, pizza crust and naan crisps. If you’ve never tried naan, it’s an Indian flatbread that’s traditionally made in a tandoor (clay) oven. It’s the perfect vehicle for scooping up curries and sauces but can also be used in so many different dishes like sandwiches, pizza and quesadillas. You can also toast wedges of Stonefire naan and serve them with homemade dips.

During the holidays when I’m entertaining, I love making crostini. Crostini are slices of toasted bread that you can top with pretty much anything you like and serve as an appetizer. They’re the perfect dish to make when guests stop by because they can be assembled quickly and they feed a crowd. I like to use seasonal ingredients when making crostini. In the summer, I top my crostini with summer produce like fresh tomatoes or berries. But since I was developing a holiday recipe, I decided to use ingredients and flavors that I love to eat this time of year like sweet potatoes, apples, cranberries, and cinnamon.

When I went to my local Publix, I found the Stonefire products in the bread aisle near the tortillas and wraps. They had several different varieties including Original Stonefire Naan, Whole Grain Naan, Garlic Naan, and even adorable Original Mini Naan. All of their products are made with the highest quality ingredients. Stonefire uses no artificial colors, preservatives, flavors or hydrogenated oils, which are often added by bread manufacturers to make their products shelf-stable. Because of this, Stonefire products have a limited shelf life of 7 days (but they can be frozen for 1 year). Stonefire flatbreads are actually shipped to grocery stores frozen and then are thawed and date coded by the retailers. So when you buy Stonefire naan, always look for the little sticker on the package with the “use by” date.

As soon as I saw the Stonefire Original Mini Naan, I snatched up a few packages because I knew they’d be perfect for my crostini! In fact, I had so much fun experimenting in the kitchen that I ended up coming up with two delicious recipes that are perfect for holiday entertaining. First up, my Whipped Sweet Potato and Ricotta Naan Crostini. Sweet potatoes are the epitome of holiday food for me. Every year, my husband makes a delicious sweet potato casserole that we all devour. This crostini takes all of those comforting flavors and puts them into a bite-sized appetizer. When you blend ricotta cheese in a food processor, it becomes creamy and silky smooth. When you add sweet potatoes, maple syrup and cinnamon, it’s transformed into a lovely orange, cloud-like spread that’s perfect to put on toasted naan. Chopped pecans add a delightful crunch.

My Apple Cranberry Naan Crostini have a mixture of sweet and savory flavors. I love making baked stuffed brie with dried fruit and nuts during the holidays but it can be a bit of work to prepare. This dish takes all of those same flavors and incorporates them into an easy-to-assemble, elegant appetizer. I simmer chopped apples with dried cranberries, maple syrup and cinnamon. Then I melt slices of brie cheese on the naan and top it with some of the fruit mixture. A sprinkling of walnuts and fresh thyme is the perfect finishing touch. 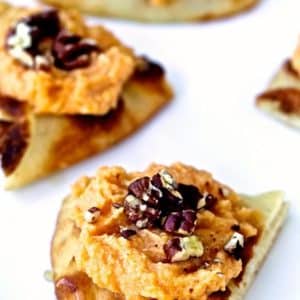 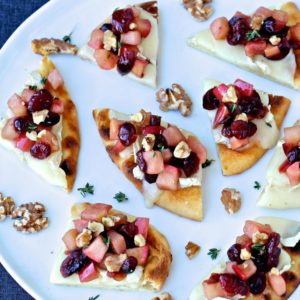