My Chocolate Raspberry No-Bake Cheesecake Jars have all of the flavors of cheesecake with none of the guilt.  It’s the perfect Valentine’s Day treat. 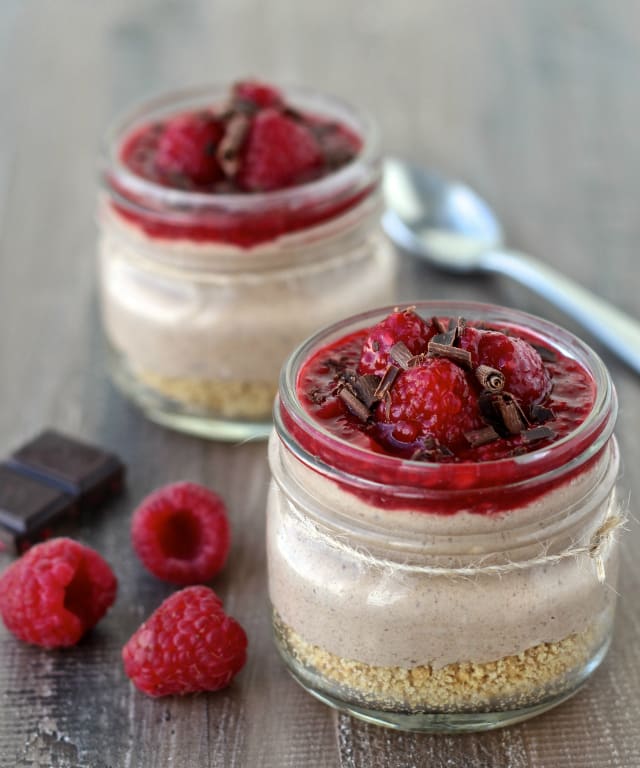 Disclosure: As a Stonyfield Blogger, I received free samples of Stonyfield Organic Yogurt and Divine Chocolate to develop this post.  All opinions expressed are my own.

With Valentine’s Day around the corner, you may be wondering what to do for that special person in your life.  I’ve always preferred to stay in for Valentine’s Day.  It’s become kind of a tradition that I make a romantic, homemade meal for my husband with all of his favorite foods.  And while the specific menu varies from year to year, there’s one thing that always remains the same- chocolate. 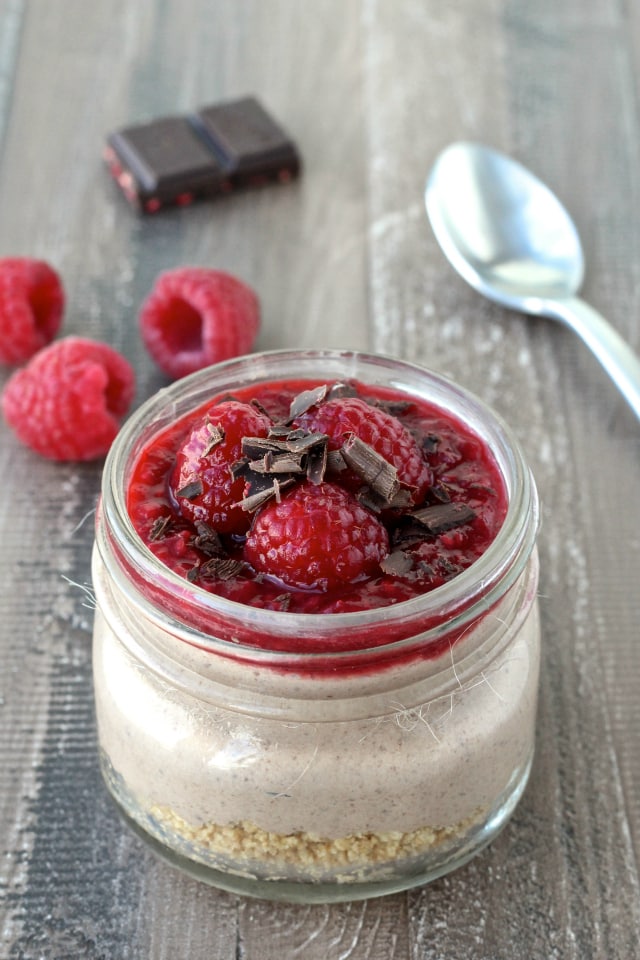 Yes, my husband loves chocolate and now my toddler has inherited this love as well.  So this year for Valentine’s Day, I decided to make them a special chocolaty treat.  My Chocolate Raspberry No-Bake Cheesecake Jars are my take on a decadent chocolate raspberry cheesecake but without all of the work.  Plus, they’re guilt-free! 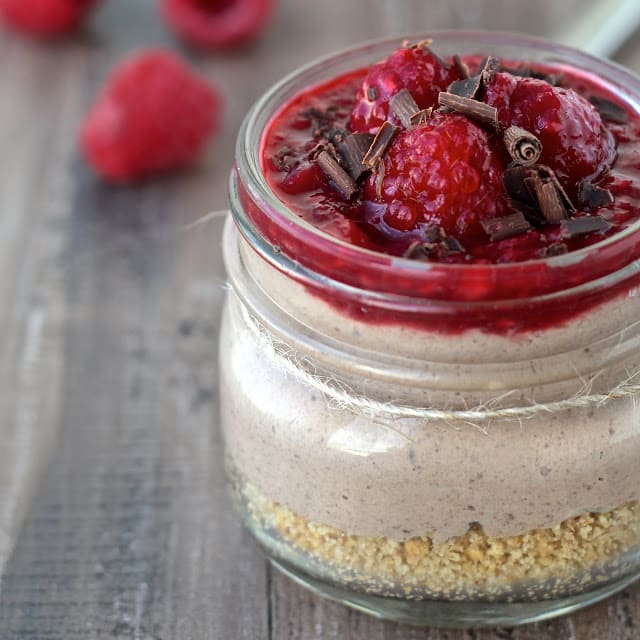 Instead of assembling and baking a whole cheesecake, my jars don’t have to be cooked and are served in adorable little mason jars.  It’s instant portion control!  They’re the perfect sweet treat to end a
delicious meal. While a slice of chocolate cheesecake at The Cheesecake Factory can add up to around 860 calories and 57 grams of fat, my jars clock in at just 277 calories and 15.8 grams of fat.  I do
this by controlling the portion size and using a mixture of Neufchâtel cheese and Stonyfield nonfat vanilla Greek yogurt.  Neufchâtel has the same tangy flavor and texture as cream cheese with about 1/3 less fat.  I whip it in a mixer with Stonyfield nonfat vanilla Greek yogurt, which adds a nice tangy flavor and fluffy consistency.  Then I add melted chocolate and just a small amount of sugar to the filling to give it a rich, chocolaty flavor. 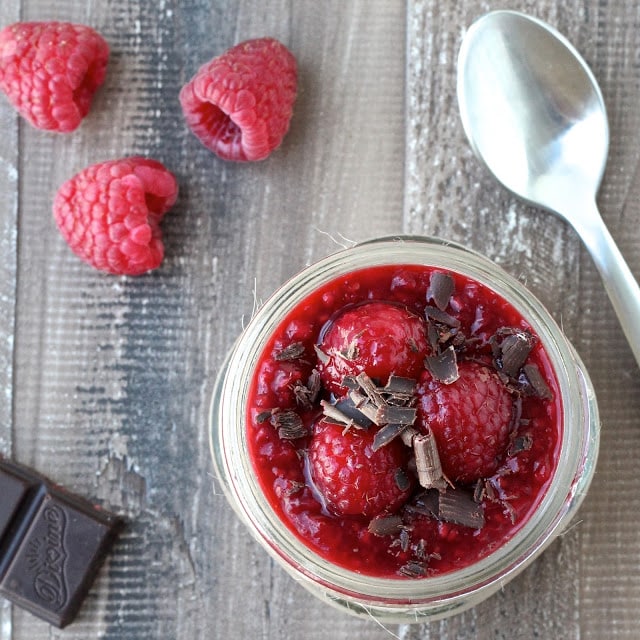 When I cook with chocolate, I like to use the highest quality dark chocolate, so I was ecstatic to sample some varieties of Divine Chocolate.  Not only do they make delicious chocolate, Divine is also a wonderful company that is co-owned by the 85,000 farmer members of the cooperative in Ghana that supplies the cocoa for each bar of chocolate.  With flavors like Dark Chocolate with Hazelnut Truffle, Dark Chocolate with Mango and Coconut, and Milk Chocolate with Toffee and Sea Salt, there’s something for everyone. 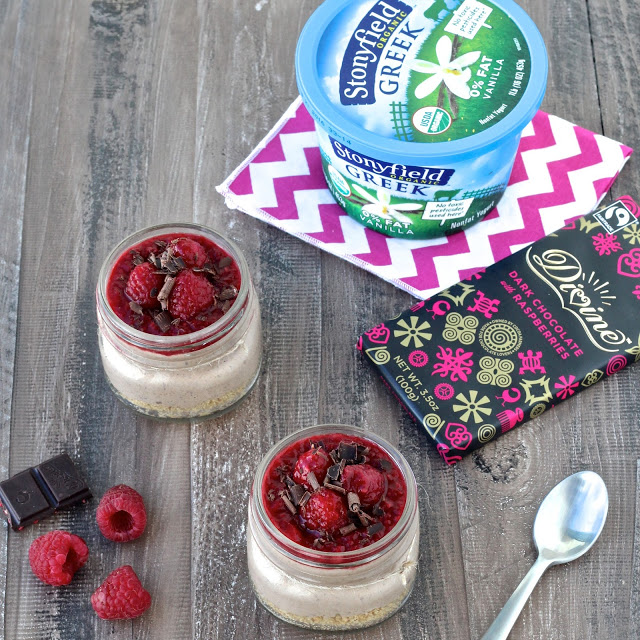 For my cheesecake jars, I used the Dark Chocolate with Raspberries flavor since dark chocolate and raspberries is one of my husband’s favorite pairings.  To assemble the jars, I first put a layer of crushed graham crackers in the bottom of my mason jars and pressed it down to form a base. Then I piped in the rich chocolate cheesecake filling.  You can spoon it in but piping it in with a piping bag or plastic storage bag will make it look prettier.  Next, I spooned on a lovely red raspberry sauce made with fresh raspberries.  And to top it all off, I finished the dish with a final garnish of chocolate shavings and fresh berries.
Chocolate, raspberries, and cheesecake… I think my husband and daughter will be very happy this year.  Happy Valentine’s Day! 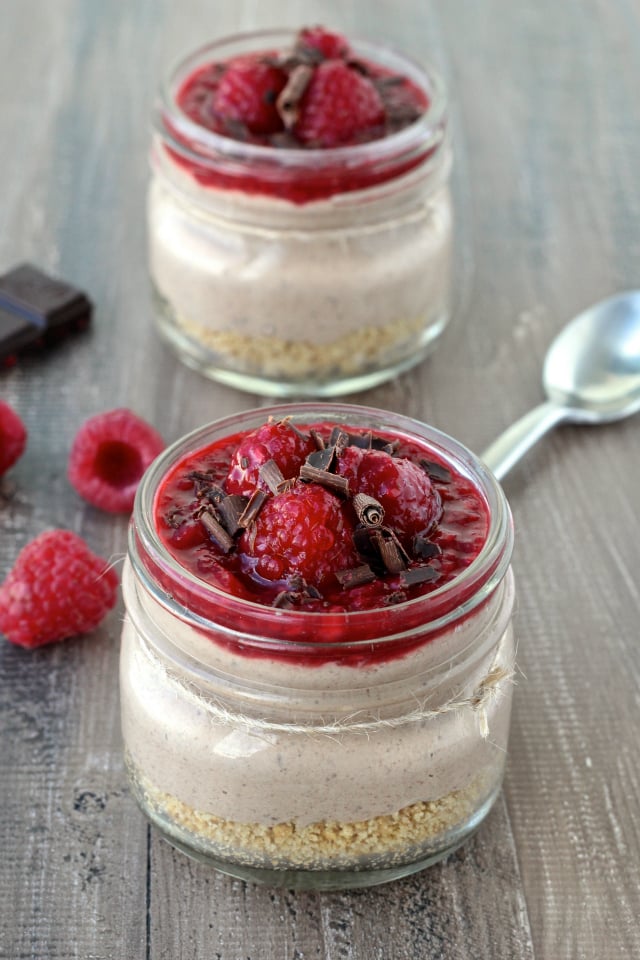 My Chocolate Raspberry No-Bake Cheesecake Jars have all of the flavors of cheesecake with none of the guilt.  It’s the perfect Valentine’s Day treat.

Hungry for more? Get the latest tasty goodness delivered straight to your inbox!

Get all the latest recipes straight to your inbox