Jump to Recipe  ↓ Print Recipe  ❒
Share29
Tweet
Pin399
Yum8
436 Shares
My Naan Bread Pudding with Spinach and Caramelized Onions is a delicious, savory dish that will make a great addition to your holiday table.  It's perfect for entertaining as it feeds a crowd and can be assembled ahead of time.  Just pop it in the oven when your guests arrive and you're good to go! 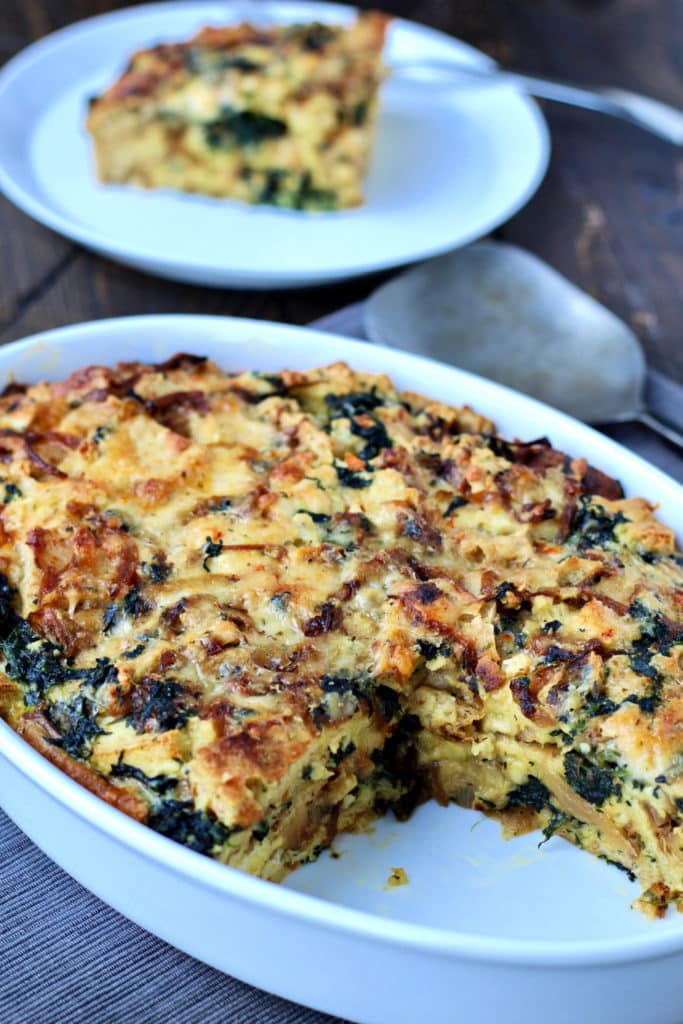 What is Bread Pudding?

When most people hear bread pudding, they think of dessert.  But there’s a whole other world of savory bread puddings and it’s pretty amazing.  Savory bread pudding is a baked casserole and is also known as strata.  You make it with cubed bread, cheese and other ingredients like vegetables or meat.  You then soak the ingredients in an egg-based custard and bake it in the oven.  My Naan Bread Pudding with Spinach and Caramelized Onions is a rich and elegant dish is equally suitable for the brunch or dinner table.  It also makes an excellent side dish or vegetarian entrée for the holidays. 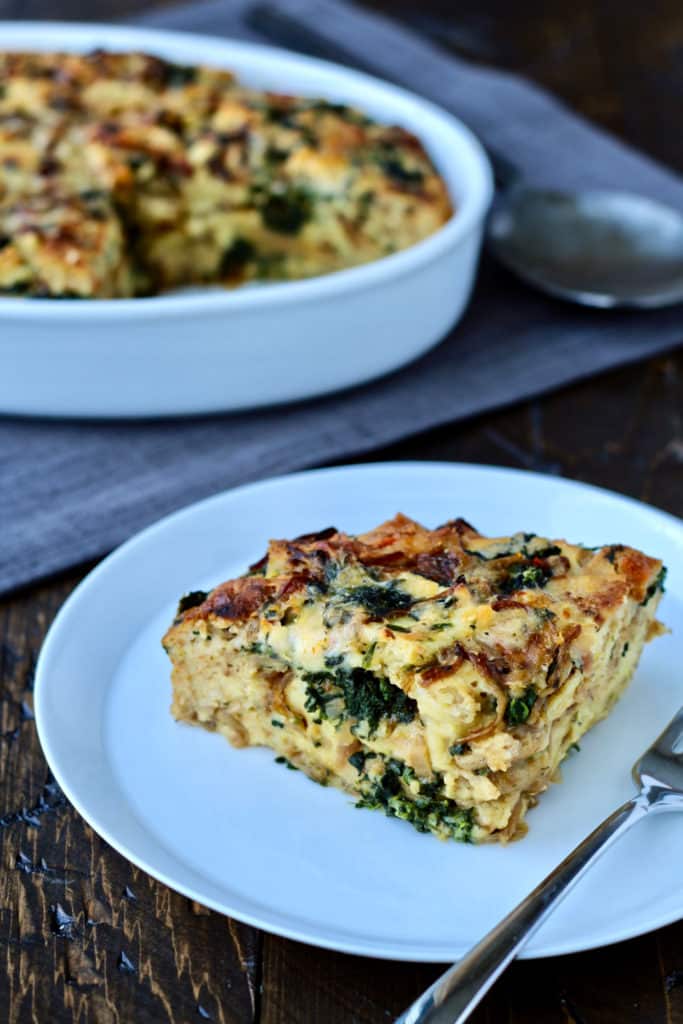 Savory bread puddings are perfect for entertaining and they definitely look very impressive when they emerge from the oven, puffed up and golden brown.  They’re an everything-but-the-kitchen-sink kind of dish and you can toss in whatever ingredients you have on hand in your pantry or fridge- leftover roasted veggies, shredded Rotisserie chicken, canned beans, you name it!  And the best part is that they’re easy to make.  In fact, you can assemble the whole thing the night before and simply pop it in the oven the next day when your guests come over. 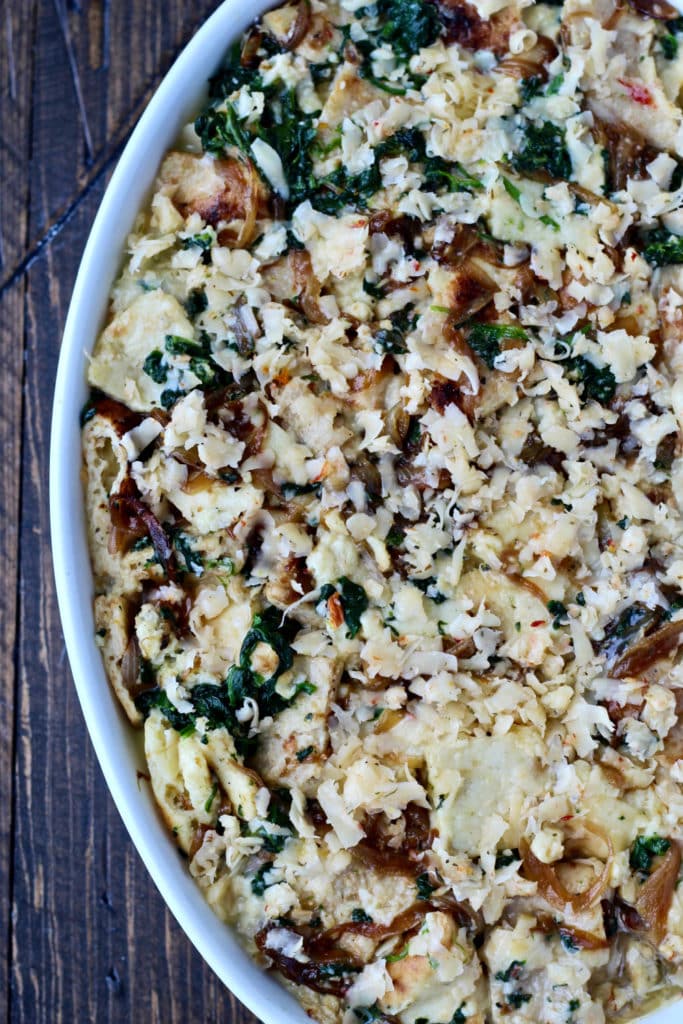 I decided to do something a little different and use naan instead of traditional bread.  Naan is an Indian flatbread that you’ve probably tried if you’ve ever eaten at an Indian restaurant.  It’s deliciously light and fluffy and is perfect for scooping up Indian curries.  You can also use naan to make sandwiches and panini, as a crust for pizza or a vehicle for dips. 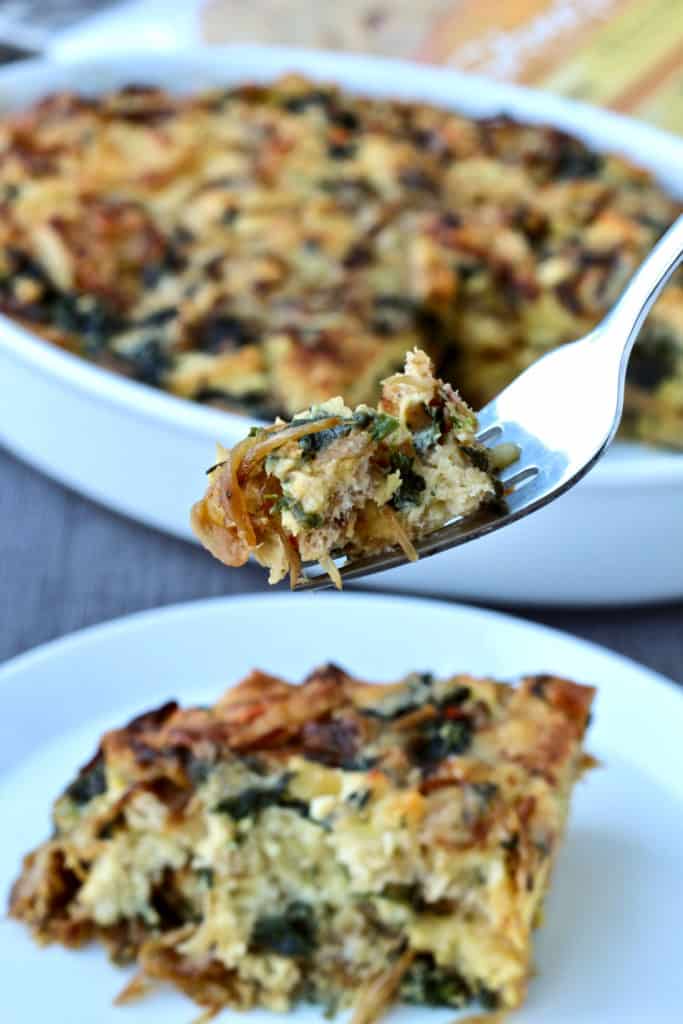 My Naan Bread Pudding with Spinach and Caramelized Onions is one of those dishes that exceeded my expectations the first time I made it.  I could barely wait for my husband to finish taking the photos before I dug into it because it smelled so good. And then I had to stop myself from devouring the whole dish!  Now, this dish has become a regular on my Thanksgiving dinner menu in place of stuffing.  It's always a huge crowd pleaser!

How to Make Naan Bread Pudding

First, make the base of the bread pudding by cutting up the naan into pieces. 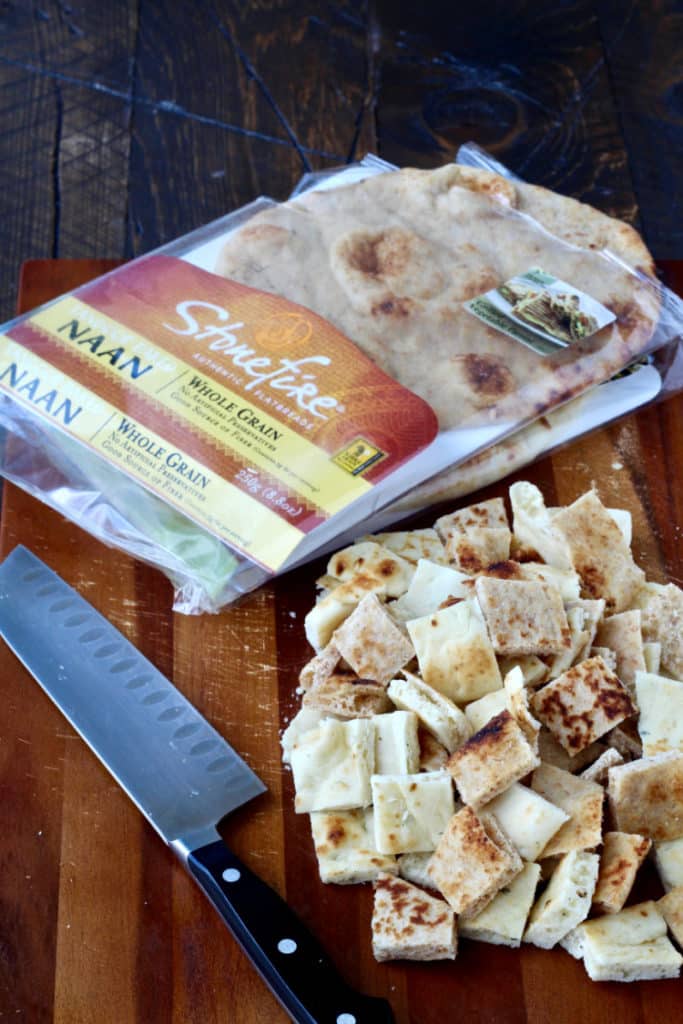 Then, mix the bread with caramelized onions, spinach, cheese, and herbs.  Caramelized onions are one of my favorite things- I just think they make every dish better with their rich, sweet flavor.  They take a little time to make but they’re oh so worth the effort.  Just look at that deliciousness!  Check out my tutorial on how to make caramelized onions. 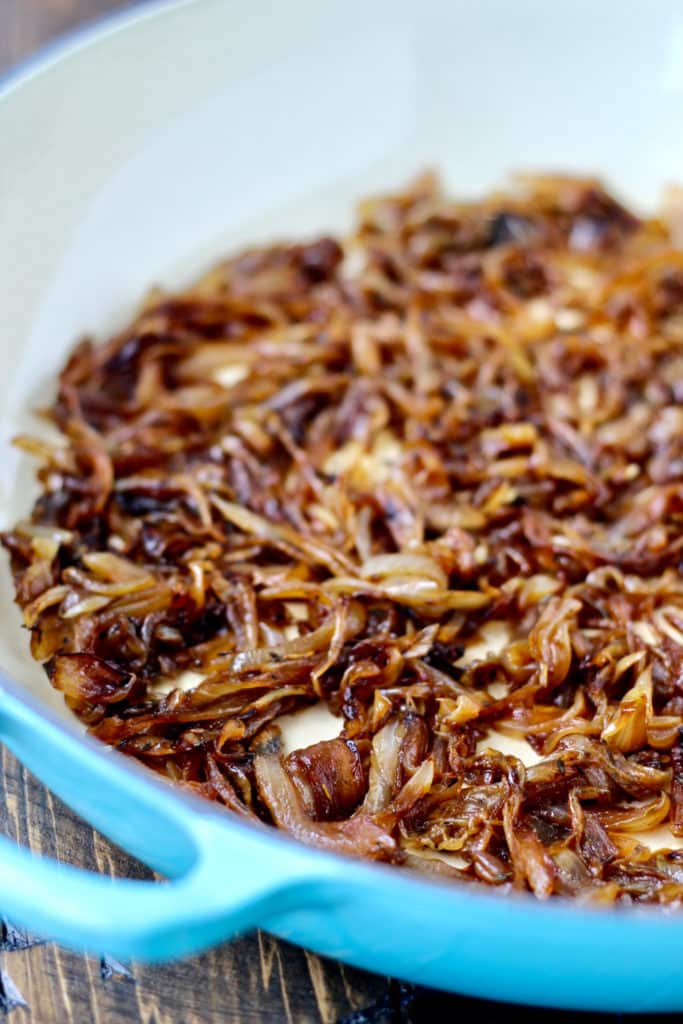 The whole mixture then gets bathed in an egg-based custard.  At this point, the dish can be covered and refrigerated overnight, if desired. 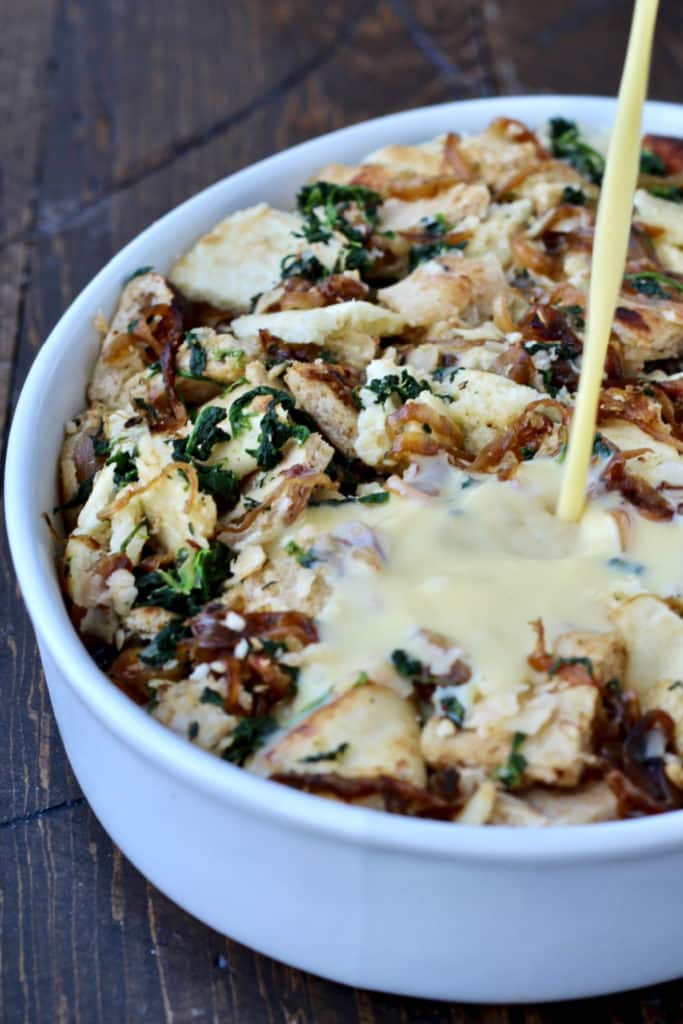 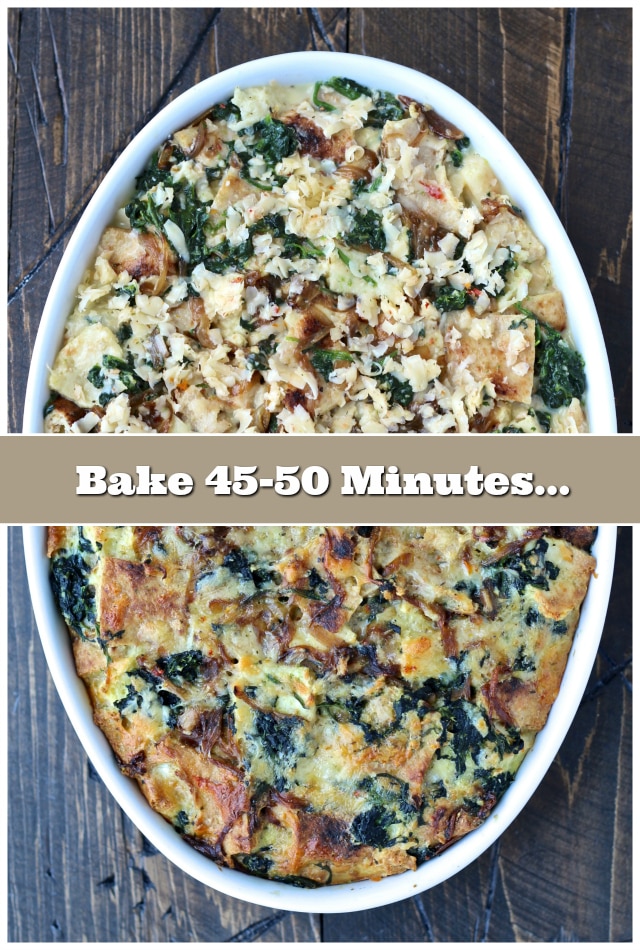 The naan really soaks up the custard and as it bakes in the oven, infusing it with flavor and moisture.  The end result is tender, creamy, and fluffy on the inside with a crispy, golden brown exterior.  The caramelized onions are laced throughout the bread pudding, providing bites of sweet goodness.  Combined with the savory spinach, earthy thyme, and salty Fontina cheese, it’s a perfect combination! 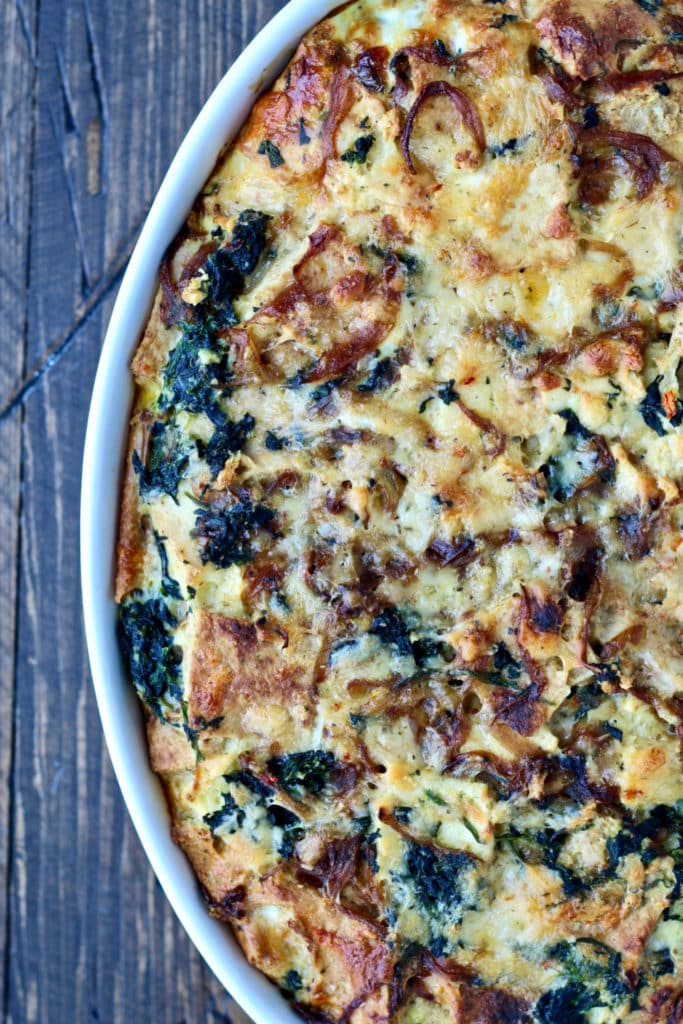 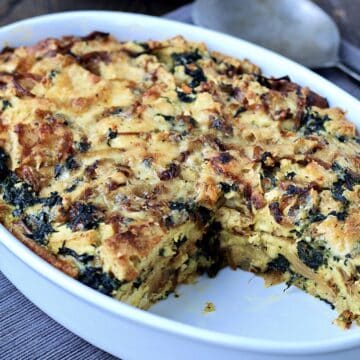 My Naan Bread Pudding with Spinach and Caramelized Onions is a delicious, savory dish that will make a great addition to your holiday table.  It's perfect for entertaining as it feeds a crowd and can be assembled ahead of time.  Just pop it in the oven when your guests arrive and you're good to go!
4.29 from 7 votes
Print Pin Rate
Course: Breakfast, Main Course
Cuisine: American
Prep Time: 25 minutes
Cook Time: 1 hour 30 minutes
Total Time: 1 hour 55 minutes
Servings: 10
Calories: 304kcal
Author: Dr. Sonali Ruder 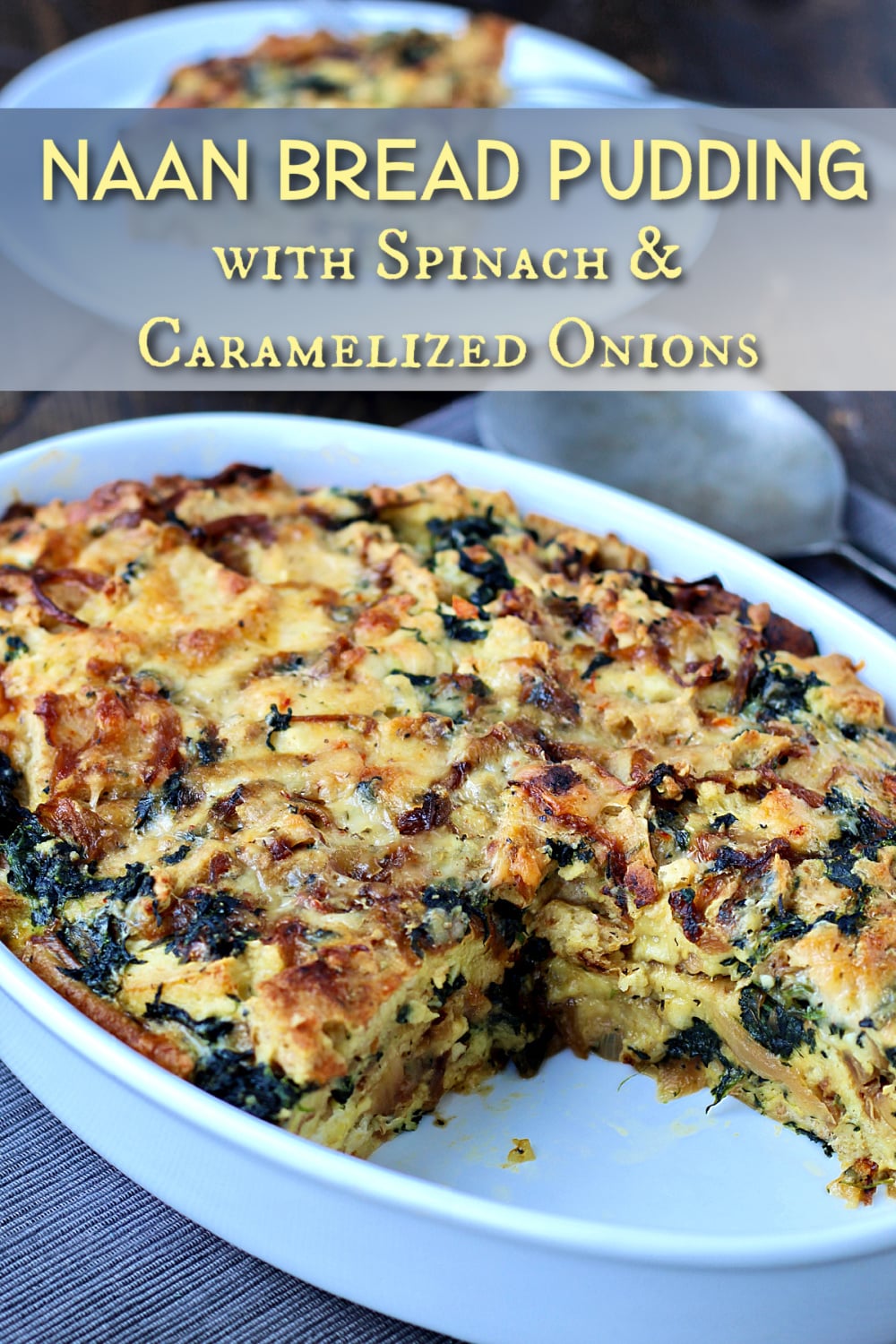