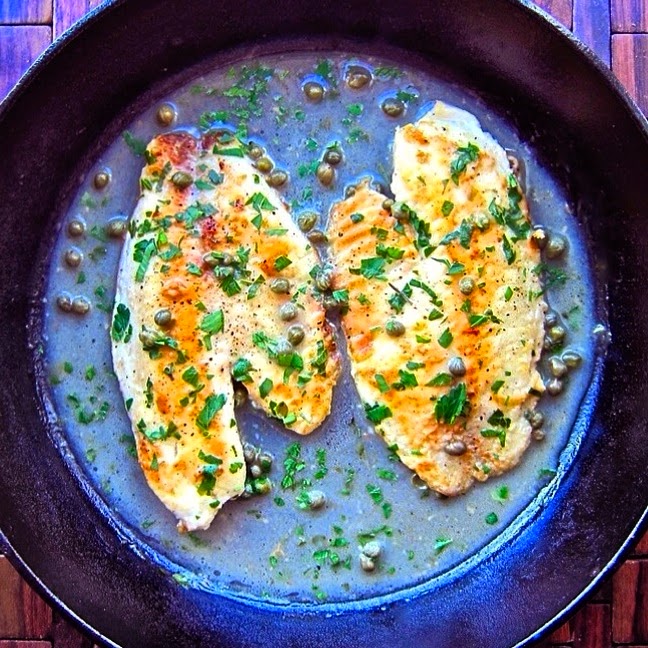 This dish is my spin on a traditional Italian dish, chicken piccata, which is chicken cooked in a lemon butter sauce and topped with briny capers.  It’s one of my favorite chicken dishes to order at Italian restaurants and it’s actually quite easy to make at home.  To put my own twist on it, I decided to make my version with tilapia instead of chicken.  I’m always looking for ways to incorporate seafood into my diet and I like to use tilapia because it has a mild flavor and is readily found in grocery stores.  It’s also a fairly firm fish so it won’t fall apart while you’re cooking it.
Most traditional piccata recipes call for large amounts of butter since it adds flavor and it helps to thicken the sauce.  This is a common cooking technique- in French cooking it’s called monter au beurre, which means to finish or “mount” a sauce with butter.  It’s done by swirling pieces of cold butter into a sauce at the very end of the cooking process to give it a glossy, velvety texture and rich flavor.  To cut down on the amount of butter, I add a small amount of flour to the sauce to act as a thickener while it reduces.  Unlike most recipes which often call for several tablespoons of butter, I swirl in only 2 teaspoons at the end- just enough to add delicious flavor.
This is a simple yet elegant dish that will only take you 20 minutes from start to finish, so it’s perfect for a quick weeknight meal.  It’s a great way to get your family to eat seafood but the recipe is easily adaptable and works well with thin-cut chicken breast or pork tenderloin.  It’s perfect served over a bed of angel hair, risotto or mashed potatoes to soak up the lemony sauce. 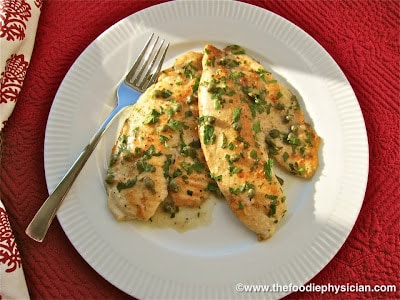 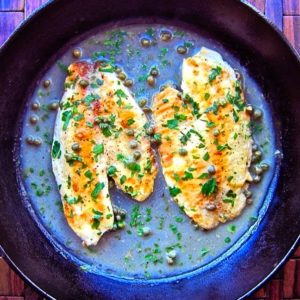 The Foodie Physician
This dish is my spin on a traditional Italian dish, chicken piccata. You can substitute any flaky white fish for the tilapia, if desired.
4.67 from 3 votes
Print Recipe Pin Recipe
Course Entree
Cuisine American, Italian
Servings 4
Calories 254 kcal

For nutritional calculations, I did not include the full 1/4 cup flour used for dredging the fish but rather used 2 tablespoons, which is the amount of flour that adhered to the fish (the rest is discarded). 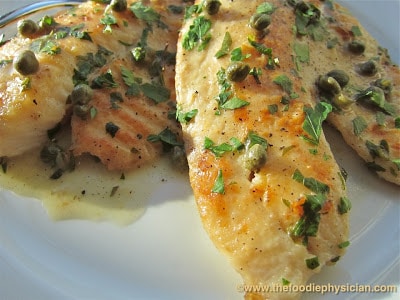 What is your favorite dish to order in Italian restaurants?  How do you like to prepare fish at home?  Leave a comment below and let me know!