Did you know that whole grains have high amounts of fiber, vitamins, minerals and antioxidants, which help reduce your risk of chronic disease? Find out everything you need to know about whole grains PLUS get the recipe for my healthy and flavorful Farro Salad with Corn, Tomatoes and Edamame.

It's no secret that whole grain products such as whole wheat flour and brown rice are better for you than refined grain products like all-purpose flour, white bread and white pasta.  In fact, the most recent Dietary Guidelines for Americans, released in January 2020, recommend that all adults eat at least half their grains as whole grains.  That's at least 3-5 servings of whole grains each day.

Whole grains have high amounts of fiber, vitamins, minerals and antioxidants, which help reduce your risk of diseases like heart disease, diabetes and obesity.  People who eat whole grains on a regular basis have a lower risk of many chronic diseases.

Refined grains, on the other hand, are milled, a process that strips away the most nutritious parts of the grain.  The refining process results in a product with a lighter texture and longer shelf life but significantly less fiber and nutrients.

Choosing brown rice or whole wheat bread is a great start but what other whole grain options are there?  The good news is that there are many varieties of whole grains and they are becoming a lot more accessible in grocery stores.

Quinoa is an ancient grain-like crop originating in South America that has become very popular recently because of its numerous health benefits.

Although quinoa is considered a whole grain, it’s actually a plant that is closely related to beets, spinach, and Swiss chard.

It has a very high protein content and is the only grain that is a complete protein, meaning that it contains a balanced set of all nine essential amino acids. It’s also gluten-free and easy to digest.

Quinoa comes in three main varieties- white, red and black.  It only takes about 10-15 minutes to cook and has a fluffy, slightly crunchy texture and mild, nutty flavor. You can also buy quinoa flour, quinoa pasta and quinoa flakes.

Quinoa is a great choice for salads, pilafs, soups or as a binder for meatballs in place of breadcrumbs. Try my Quinoa Salad with Spinach and Strawberries, Quinoa Fried "Rice" or Black Bean & Quinoa Veggie Burgers.

Oats are loaded with fiber, vitamins, minerals and antioxidants.

Most oats in this country are steamed and flattened to produce old fashioned, quick or instant oats.  If you prefer a chewier texture, try steel-cut oats.

Steel-cut oats are whole oats that have been cut down in size with steel blades.  They take a little longer to cook than old-fashioned oats but they make a delicious and hearty breakfast dish.

Try grinding old-fashioned oats up and using them as a healthy coating on chicken breast or fish instead of breadcrumbs.

One of the oldest cultivated grains, barley comes in several different varieties.

Hulled barley is covered barley that has been minimally processed to remove only the tough inedible outer hull leaving the bran layer intact.

Pearl barley, which is the most common type sold in stores, has been polished, or "pearled" to remove some or all of the bran layer along with the hull.  Technically this means pearl barley is a refined grain but it's still healthier than other refined grains because some of the bran may still be present and it is still high in fiber.

It has a mild nutty flavor and chewy texture that’s good in soups, stews, risottos, or breakfast cereal. Try my Barley Salad with Roasted Carrots and Chickpeas.

Bulgur is made from wheat kernels that are steamed, dried and cracked.

Bulgur is common in Middle Eastern dishes like tabbouleh, a salad made with vegetables and fresh herbs.  Most types of bulgur only need to be soaked to become tender. This makes it a great option for a nutritious side dish on a busy weeknight.

Despite its name, wild rice is not a rice at all but rather the seed of an aquatic plant native to the Great Lakes region of the US.  It is very high in protein, more than twice that of brown rice.

Wild rice is usually sold in blends with other types of rice because of its high price and strong flavor.  Its dark color adds striking appearance to dishes like pilafs and salads.

Farro is an Italian grain made from emmer, an ancient strain of wheat.  Farro cooks in about 30 minutes and has a pleasant, chewy texture.

Similar to barley, to get the whole grain benefits of farro you want to look for products labeled “whole” farro rather than “pearled,” which has had some of the bran layer removed. Try farro in salads and baked casseroles.

This is just a short list of whole grains.  There are many others including less common grains like amaranth, millet, spelt, grano and kamut.  Not sure how to get started?  Use my recipe for Farro Salad with Corn, Tomatoes and Edamame as a starting point.

To ensure that your salad has lots of flavor, season the cooking liquid when cooking the farro or whatever grain you are using.  Also, be sure to toss the cooked grains with the dressing while it’s still warm so that it fully absorbs it.

Use ingredients with varied flavors, colors and textures like fresh vegetables, crumbled cheese and chopped nuts.  And finally, toss in some fresh herbs for an extra pop of flavor. 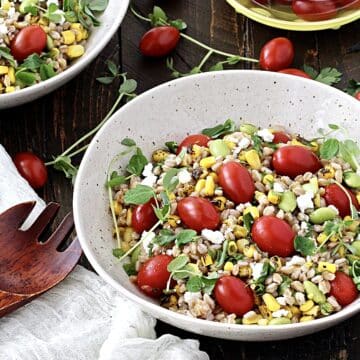