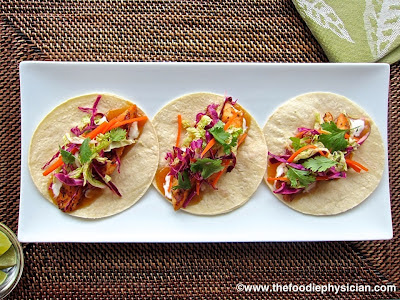 My husband and I vacationed in Turks and Caicos several years ago for our first wedding anniversary.  Besides the beautiful white sand beaches, crystal clear water and perfect weather, the thing that we’ll remember the most from that trip is a specific dish that we ate.  I guess that isn’t surprising for such big foodies!  While on vacation, we discovered the most delicious fish tacos at a restaurant called Hemingway’s just down the beach from our hotel.  We became so obsessed with them that we ended up eating them almost every day.
I remember the tacos being so simple yet so perfect.  Pieces of fresh, grilled fish were served in warm, soft tortillas.  Instead of the usual salsa that accompanies traditional Mexican tacos, these Caribbean-style tacos were served with a sweet mango chutney and a dollop of tangy sour cream that nicely balanced the savory fish.  The heat from the fish turned the creamy sour cream and sweet chutney into a heavenly, drippy mess that would run down our chins.  YUM!
Over the years I’ve searched for similar fish tacos back in the states but I’ve never found anything close.  I’ve had many deep-fried fish tacos but I was craving a healthier, grilled version like what we had experienced at Hemingway’s.  So I decided to recreate them at home with a few little changes.  For my Caribbean Fish Tacos I used flounder but you can really use any mild, white fish- whatever looks good at your local fish market.  I seasoned the flounder with a homemade spice mixture comprised of dried thyme, paprika, onion powder, cayenne, salt and pepper.  Then I cooked the fish on my grill pan, which only took a few minutes.  Honestly, the grilled fish looked so good, I could have eaten the whole plate just like that with a little squeeze of lime juice.  But I restrained myself and continued on my quest to assemble the perfect fish taco. 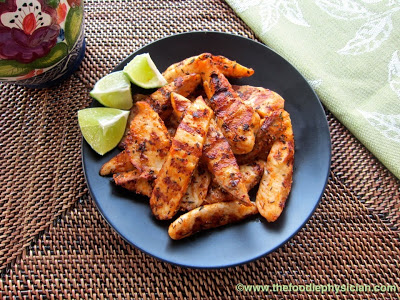 I decided to use soft corn tortillas as my base as they are more nutritious than white flour tortillas.  Corn tortillas are lower in fat and are a good source of fiber and several vitamins and minerals.  They are also a good option for those on a gluten-free diet.  On top of the tortilla, I added a dollop of mango chutney and reduced fat sour cream.  Although I’ve made my own mango chutney in the past, in the interest of saving time, I decided to use store-bought mango chutney.  Next, I piled on a couple of pieces of spicy, grilled fish.  And finally, to top it all off, I added a homemade slaw made with a combination of green and red cabbage and carrots.  You can buy a bag of coleslaw mix to save some time.  Although Hemingway’s used lettuce on their tacos, I prefer the coleslaw mix for the extra crunch.  I added a few cilantro leaves and a squeeze of lime juice just before serving and my mission was complete- fish taco perfection! 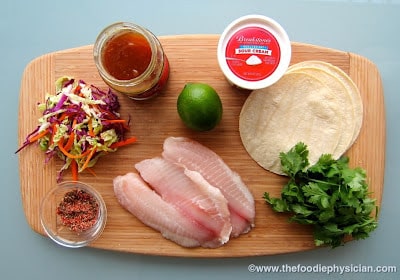 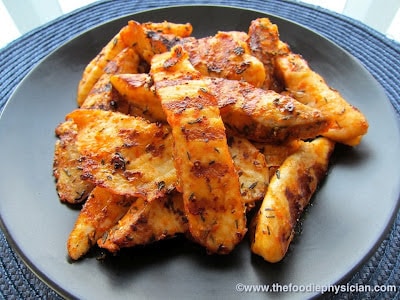 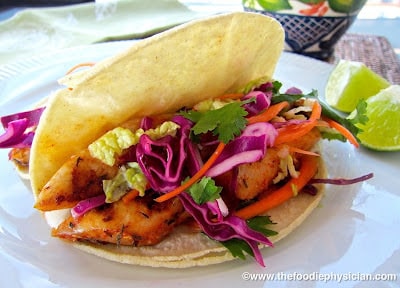 Do you have a favorite dish from a trip you’ve taken in the past? Have you tried recreating it?